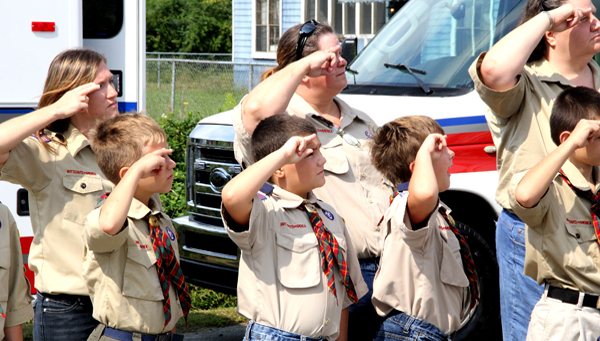 Local Boy Scouts salute as the American Flag is raised during a Saturday morning ceremony at Station 80 - Gates County EMS and Rescue. The new flag and flagpole were donated by Woodmen of the World. Staff Photo by Cal Bryant

GATESVILLE – No matter where you are, no matter your age….seeing the stars and stripes of our nation’s beautiful flag raised should remind each and every true-blooded American of the sacrifices made to keep those colors, that fabric, still flying high and proud today.

On a bright and breezy morning near here Saturday, the “red-white-and blue” took center stage at Station 80, the home of Gates County Rescue & EMS. There, a brief ceremony was held to raise a new flag on a new flagpole – an event that also served as an honor and remembrance ceremony conducted by Woodmen of the World.

Joe Nichols, field representative for Woodmen of the World and a member of Woodmen Lodge 862 of Murfreesboro, presided over the event.

Nichols spoke of the efforts of Woodmen of the World, an organization that has long took pride in annually conducting thousands of flag raising ceremonies. Many have occurred in the years since the tragic events that unfolded on Sept. 11, 2001.

“These flags not only honor the heroes and victims of 9-11, but also the men and women of our armed forces of today, those serving in combat,” he said. “These ceremonies also pay tribute to our local heroes as well, those right here in Gates County – police officers, firefighters, emergency rescue personnel and other first responders who put their lives on the line each and every day. They all deserve our thanks and admiration.”

Nichols saluted the efforts of Woodmen of the World, saying that organization, for more than 120 years, has, “strived to promote family, community and country.”

“The events of Sept. 11, 2001 changed our lives forever, making us realize that freedom is a very precious thing and something that should never be taken lightly,” Nichols stressed. “As we dedicate this flag and flagpole today, remember that the flag flying at the top of the pole is a symbol of America’s enduring freedom.”

North Carolina District 1 State Senator Stan White (D-Dare County) delivered the keynote remarks. He praised the efforts of local emergency responders such as Gates County Rescue & EMS for their untiring duties and encouraged the county’s commissioners to continue to fund the equipment side of that organization.

“When these men and women get up out of bed at 3 o’clock in the morning, they don’t know what they’ll be facing, their families don’t know if they’ll arrive back home unharmed, but they answer the call each and every time and we need to thank them for those efforts, for that love of community,” White said. “They are dedicated volunteers; this county, this state cannot operate without the dedication of volunteers. They are part of the fabric that makes our communities strong.

“I can’t say enough how important you are, how important your family members are, as you go about your daily duties of serving the Gates County community,” he continued. “We’re all facing tough financial times and need to tighten our belts, but if you do decide to donate to an organization I would implore you to think first of your emergency responders. They provide an unequaled service to everybody in Gates County.”

White also praised the efforts of Woodmen of the World for continuing to recognize America’s true heroes.

The Honor Guard of Gates County Boy Scout Troop 202 was tasked with the duty of raising the new flag for the first time. Joining them in “salute” were members of Gates County Cub Scout Pack 155.

In his invocation, Pastor Tom Hall of Beulah Baptist Church of Sunbury reminded everyone of the sacrifices made by brave men and women, efforts that allowed those attending Saturday’s event to gather as they so choose.

Chris Jernigan performed “Taps” as the crowd bowed their heads in a moment of silence for the victims and heroes of 9-11. Woodmen of the World Youth Members led the audience in the Pledge of Allegiance. Those youngsters also distributed handheld American flags to those in attendance.

Tours of the EMS station and equipment were given following the ceremony.