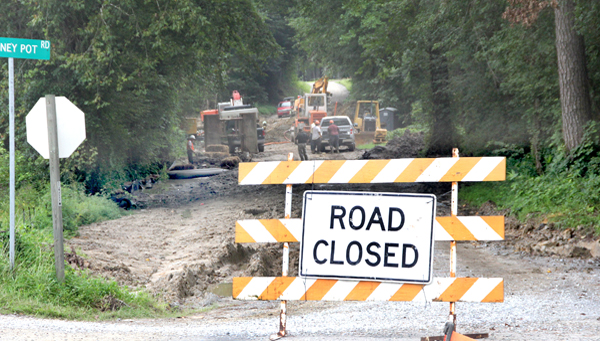 GATESVILLE – The sewer pipes are laid….now they need to be connected to a treatment facility.

Gates County, in an effort to improve its economic future, is moving forward with a multi-stage wastewater project that will serve the new Merchants Commerce Center and nearby areas along US 158.

The latest key development in the project is that the county has received a permit from the state to build and subsequently operate the treatment plant. That permit opens the door for the county to launch Phase 2 of the project.

“With that permit in hand you’re able to go to the bidding process, advertise the project and receive bids from perspective contractors,” said Gus Simmons of Cavanaugh & Associates, the engineering firm under contract by the county to provide plans on how to proceed with these infrastructure improvements.

Prior to putting out the advertisement for bids, Simmons said there was one key item that first needed to be addressed….sending copies of the bid documents to the four agencies that are combining, in grants, $2.15 million to the project.

“They need to have one final look to make sure everything is consistent with their expectations,” Simmons said. “Once we gain approval of the bid documentation from the funding agencies we need to advertise the project for bid.”

“We have contracted with Gates County during each step of this project instead of having one master contract,” Simmons noted.

Provide additional information and clarification as may be requested by bidders;

Prepare discussion of bids and bid tabulation; and

Provide periodic construction observation to review installations for substantial compliance with project plans and specifications, and as required for Engineer’s Certification;

That scope of work does not include any required permit application fees; grant assistance or grant administration; and geotechnical, soils, or materials testing.

In separate bids, the Gates County Board of Commissioners, at a recent meeting, approved, all without objection, sending the bid documents to the funding agencies for final approval; okayed the advertising of bids for Phase 2; and agreed to the new contract with Cavanaugh.

The advertisement for construction bids is expected to be published in early September. Simmons said he would prefer having the bidding process open for 45 days.

As far as Phase 1 of the project – a $920,000 contract to H.G. Reynolds Company of Henderson for the installation of sewer lines – Simmons said that work is nearing completion.  That part of the project included all piping to Merchants Commerce Center, the sewer pump station back to the treatment plant (located behind the now closed Gates County Correctional Facility) and pipes to Cotton Gin Road.

“As of early August there remained a few taps to install and a performance test of the pipes was still on the “to do” list,” Simmons said. “The firm you hired to do that work was very open with communications; they’ve done a good job and performed it in a timely manner despite some extremely wet weather for this time of the year.”

To date, the entire project is expected to cost $2.88 million. Fortunately the county landed four major grant funding partners who will combine to pay the lion’s share of the costs – $900,000 from the Economic Development Administration, $700,000 from the North Carolina Rural Center, $350,000 from CDBG and $200,000 from the Golden LEAF Foundation.

Gates County has earmarked nearly $732,450 for the project. Fifty percent of that money is coming from the water/sewer fund while the other half is from the county’s General Fund.

CREEKSVILLE – The South Creek Cougars came to town looking for their first victory of the year. Instead they ran... read more