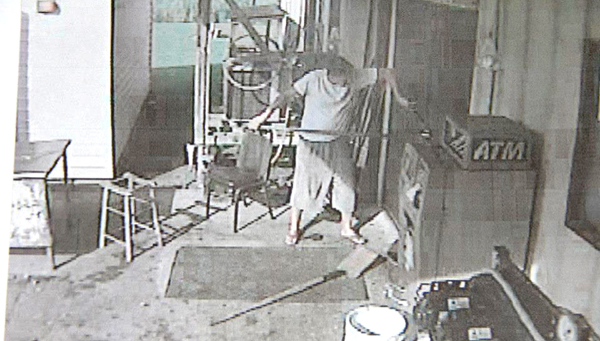 Although this low resolution image is a bit distorted, it does clearly show a suspect attempting to break in to the rear door of Tarheel BBQ late Monday afternoon. The Gates County Sheriff’s Office is attempting to learn the identity of the suspect. Photo courtesy of Tarheel BBQ

EURE – His identity has yet to be determined, but his actions have been witnessed around the world.

GatesCountylaw enforcement officials are seeking an individual wanted for questioning in connection with an attempted break-in at Tarheel BBQ on Monday.

Meanwhile, thanks to Facebook, still images captured off surveillance cameras at the popular local restaurant showing the alleged culprit’s criminal intent have been shared across theUnited Statesand as far away asAustralia. So has the story of the suspect becoming so tired after repeated failed attempts to break in the back door of the restaurant that he laid down and took a three-hour nap.

Ricky Hedgepeth, who co-owns the eatery with his wife, Paige, said he printed nine still images from the surveillance devices and posted them to his Facebook page.

“I’ve got close to 1,000 friends on Facebook,” he said. “If a quarter of them share those photos with their friends, and so on and so on, then somebody out there will recognize this guy.”

Hedgepeth added that he was impressed by the power of the social network.

“I didn’t post the photos until Wednesday night and by the time I got up on Thursday I had gotten responses from here locally and from as far as England and Australia,” he said. “I need to thank my Facebook friends, a lot of people showed concern, some I don’t even know. They feel the same way I do about a thief.”

The surveillance cameras first recorded the suspect as he checked the front doors and peered in the front windows of the restaurant at around 5 p.m. Monday (Tarheel BBQ is open Tuesday through Saturday). He then made his way to the rear of the building where Hedgepeth said the suspect worked for nearly 30 minutes, using a variety of items, in an attempt to pry open the double back doors. Those doors, he said, are metal and dead bolted at the top and bottom on the inside.

“At first he used a shovel that we had lying around the back,” Hedgepeth said. “He then broke into our cookhouse (a separate shed) where he found a butcher knife and a putty knife that he used to either try and pick the lock or stick it between the double doors in an attempt to pry it open.”

Hedgepeth said those repeated failed attempts to gain entry must have, “tuckered the poor boy out.”

“The camera shows him sitting down, smoking a cigarette and then he laid down and took about a three-hour nap,” Hedgepeth stated.

At around 9 p.m. the suspect awoke from his slumber and left.

“The camera never showed a vehicle, but he could have parked a short distance away and walked here,” Hedgepeth noted.

The Sheriff’s Office did collect some evidence, to include a cup believed to have been used by the suspect, his sunglasses (that he inadvertently left behind) and a cigarette butt.

“They told me they got a good (finger) print off the cup,” Hedgepeth said of the Sheriff investigator’s efforts.

The suspect is described as a white male wearing a white t-shirt and long, baggie shorts. He has a ponytail that was noted high on the back of his head. Those knowing anyone matching that description are urged to contact the Gates County Sheriff’s Office at 252-357-0210.

“I don’t like folks messing with something that ain’t theirs. If you need something, just ask me and I’ll be glad to help,” Hedgepeth closed.