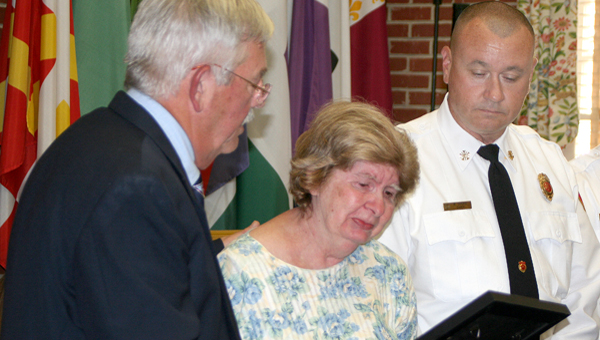 MURFREESBORO –The life and legacy of the Rev. Oliver Winstead “Wint” Hale Jr. was remembered by the town of Murfreesboro last week.

During their regular meeting, the Council approved a resolution honoring Hale who was a minister by profession and served as the Chaplin to the Murfreesboro Fire Department. He passed away July 10.

In the resolution, read by Mayor John Hinton, the council recognized Hale distinguished service as a valuable member of the fire department and the Murfreesboro community.

A native of Bertie County, he served many churches in Eastern North Carolina. He was a member of Mount Tabor Baptist Church in Murfreesboro and former member of Cashie Baptist Church where he was ordained in 1969.  He served Pineola, Ingold, Concord, Merry Hill, Lawrence, Bolivia, Fort Barnwell, Mount Tabor and Ebenezer as their pastor and Buckhorn, Bethel and Margarettsville as their interim pastor.

He was a member of the Woodmen of the World, the Lions Club and Habitat for Humanity. He was also a Chaplin for Vidant Roanoke Chowan Hospital.

“Mr. Hale enhanced spiritual leadership and guidance by serving as a valuable member of the Murfreesboro Fire Department as Chaplin for more than three years,” said Hinton. “Mr. Hale instills the spirit of Murfreesboro and leaves a legacy that will always be honored and never forgotten.”

Hinton was joined by Hale’s wife, Phyllis, and members of the fire department as he presented the resolution.

“We do appreciated Pastor Hale’s service to our community, especially to our fire department,” he said to Mrs. Hale as he presented the resolution.

WINDSOR – Bertie High School will get a win Friday without taking the field. The Falcons had planned to travel... read more