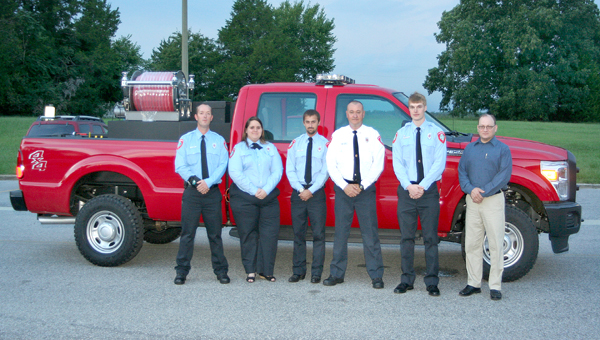 MURFREESBORO – The Murfreesboro Fire Department has a new brush truck thanks to a grant and citizens donations.

According to Cooke, a 50/50 grant from the State Fire Marshal’s Office helped the town purchase the $26,000 truck.

Affixed to the bed of a truck is a newly purchased fire pump, which was purchased with the help of fundraisers and donations from citizens and supporters.

The apparatus and truck will be used for woods, brush, grass and other fires that are off-road and inaccessible by the department’s larger vehicles.

“The firemen and sales help purchase the unit in the back of the truck, which was over $10,000,” he said. “So the cost to the towns and the citizens of the town is only half of what we paid for the truck.”

Cooke said the department’s previous brush truck was a ‘80-something model.

“It was wore out,” Cooke said.

In a later interview, Cooke gave thanks for the donations and supporters who have come out to the department’s fundraisers.

“On behalf of the fire department we thank you for all the donations,” he said.

Bridges to be replaced

Two bridges are scheduled to be replaced in the Roanoke-Chowan area. Carolina Bridge Company has been awarded the contract to... read more