WINDSOR – An officer from Bertie Correctional Institute found himself behind bars on charges of his own this weekend. 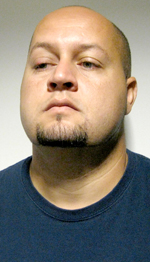 According to the Windsor Police Department, Larry Baker, 33, of Cedar Landing Road in Windsor was arrested and faces drug charges following an incident at the state prison.

Sgt. Ricky Morris of the Windsor PD said the department was called after staff members from the prison found Baker to have marijuana down his pants when he reported for work Saturday.

“They contacted our office and Officer Antonio Tillman responded,” Sgt. Morris said. “He investigated the matter, collected the evidence and filed charges.”

Baker is charged with possession with intent to sell and deliver marijuana and possession of a controlled substance on prison property. He was placed in the Bertie-Martin Regional Jail under a $10,000 secured bond, but has posted bail.

His first court appearance is set for Wednesday in Windsor.

Tillman is continuing to investigate the matter.