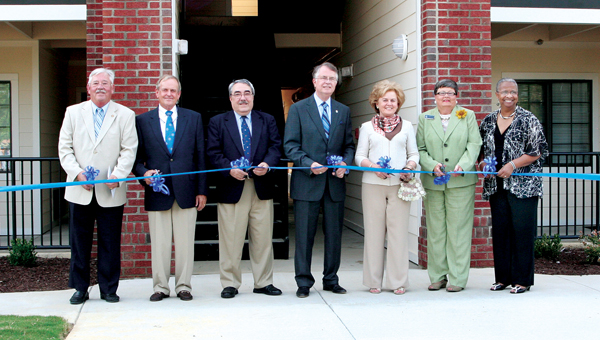 MURFREESBORO – Two newly constructed buildings stand here as a testament of growth, and a promise that has become reality.

On Thursday of last week, faculty, staff, guests and government officials gathered at Chowan University to celebrate the completion of Phase I of Whites Crossing, a residential complex, which will help accommodate the university’s ever-increasing student enrollment.

CU President Dr. Christopher White welcomed guests to the ribbon cutting ceremony and open house which he said was a historic occasion for the university.

“The (Board of) Trustees I know share in the excitement, the joy of this day,” he said. “Many of them thought it would never come, and we’re having fun making reality out of promises.”

White said the students are the number one concern at Chowan University.

White spoke about how CU is experiencing “remarkable” growth and how over the past five years it has been the fastest growing private institution percentage-wise in the state.

“We’re kind of accustomed to enormous growth each fall,” he said. “This fall is no different. We expect a big enrollment this weekend when the students come.”

Frank Rose, chair of the Board of Trustees, thanked the audience for making the event a priority to attend.

“Eleven months ago we stood at this very site to embark on a new journey for Chowan. We broke ground and we announced the name of this new residential community, Whites Crossing, and now today we celebrate the culmination of many hours of planning and countless hours of construction as we formally open the first phase of Whites Crossing,” he said. “We strive to achieve her mission in what we do here and we strive to achieve her mission in this community.”

“This is a milestone. I’m told this university is a fast-growing institution; in fact you’re the fastest growing university in the state of North Carolina,” Butterfield said. “You’ve grown over 50 percent over the past few years, and that is very significant and it says a lot about who you are.”

He said according to the U.S. Department of Education the price of tuition and fees has risen approximately six percent each year for the last 10 years forcing college students to borrow more money.

Butterfield said college degrees have never been more important in getting a job and those who only have a high school degree are two times likely to be unemployed.

“More students than ever need federal financial aid,” he said. “If we want to remain competitive in the global job market we must continue to prioritize in investing in education.”

Butterfield said the Pell Grant Program is the largest source of federal financial aid for students attending college and research shows financial aid is a major factor in whether students can afford to enroll in and complete college.

“About three of every four Pell Grant recipients have a combined family income of less than $30,000 per year. More students now qualify for Pell grants than ever before,” he said. “I joined a lot of my colleagues recently in voting to preserve the Pell Grant Program with a maximum benefit of $5,500 and this is going to touch almost 10 million students in our country, including students right here on this campus.”

Phase I of Whites Crossing, named by the trustees in honor of White and his family, is a $4.7 million investment for CU. Twelve other buildings are planned for the site.

“Hopefully, very soon we will be building yet more of these buildings because enrollment keeps going and so demand is pushing that,” Dr. White said.

Following the ceremony the crowd was invited to tour the buildings.

Building A is the largest of the two with three floors featuring four suites per floor and each are capable of housing eight students. Amenities include an efficiency kitchen and a common washer and dryer room.

Building B features 12 apartments with four single bedrooms, full kitchen and laundry facilities within the apartments.

White said a handful of students are already living in the buildings.

Bears look to make it a streak

AHOSKIE – Two makes it a streak. Hertford County High School will look to put together a streak on... read more