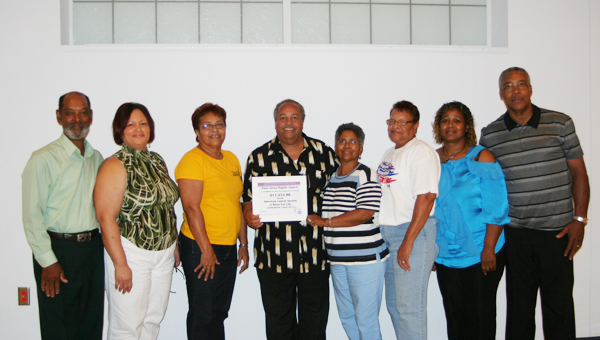 JACKSON – In its inaugural year, Northampton Relay for Life has raised more than $50,000 for the American Cancer Society (ACS).

“That is a remarkable amount for a new event, there’s some events that have been around for years that don’t raise that much money.” Fleming said. “Thank you guys so much on behalf of the American Cancer Society and all the cancer patients, survivors and their families because that’s going to provide a lot of programs and services, and hopefully do a lot of good research that will one day find a cure.”

Fleming recognized the event’s sponsors as well as the 23 teams, six of which qualified for the Team Fundraising Club Program.

The top team fundraiser of the event was Piney Grove Baptist Church which raised $11,313. Fleming presented the team with the Jade Team Fundraising Club Level.

Cooper thanked the committee, sponsors and supporters for their hand in making Northampton’s first event a success.

“I just want to thank each and every one of you because when we started we started with nothing and we have $54,000,” she said. “I know a lot of people made sacrifices for this to happen and I hope and pray that next year will be bigger and better and this will bring us together as a community and as a family.”

The wrap up gathering featured poems, songs and refreshments for guests. The audience also heard from Dwight Ricks, a cancer survivor.

Ricks recalled his diagnosis (a malignant spot was found on his side) and how the finding shocked him, but also how he found strength to face the disease.

“I just basically put the matter in God’s hands and told the doctors lets go do what we need to do,” he said.

Ricks said other cancer survivors are an inspiration to him.

“They are constantly fighting this disease—they have good days, bad days and even worse days,” he said. “They’re striving and they put things in the Lord’s hands and go from there.”

The kick off for next year’s event is October 16 with a location to be determined.