Murfreesboro Police Chief Darrell Rowe reported that at shortly before 12 midnight on Friday, Aug. 3, MPD officers were dispatched to the parking lot of Speedway on Main Street in an effort to clear out a large crowd that had gathered there after the Watermelon Festival.

At that time, Auxiliary Officer Adam Benton along with a Hertford County Sheriff’s Deputy approached a vehicle and noticed an open 12 pack of beer.  Further investigation revealed that one of the subjects in the vehicle was underage.  The officers called for MPD Sgt. Chris Owens and K-9 officer Kane to come to the scene. 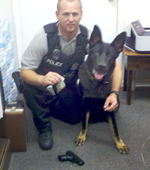 Murfreesboro Police Sgt. Chris Owens and K-9 officer Kane are shown with a bag of marijuana and a handgun seized during an arrest on Aug. 3.

“K-9 Kane began to search the car and immediately indicated for the presence of narcotics in the passenger area of the vehicle,” Rowe said. “The officers searched where Kane had indicated and found a fully loaded semi-automatic handgun and 14.4 grams of what we believe to be marijuana.”

Two were arrested – Aunte T. Sessoms, 20, and Todd L. Beasley, 21, both of Ahoskie. Both were charged with possession with intent to sell or deliver marijuana, possession of drug paraphernalia, possession of a concealed weapon, possession of a stolen firearm, and maintaining a vehicle to store a controlled substance.

Shortly before 3 a.m. on the morning of Saturday, Aug. 4, MPD Sgt. Jamie Dilday and MPD Patrol Officer William Barmer were dispatched to the South Drive area in reference to a reported fight in progress.

“Once there the officers noticed two men acting in a suspicious manner,” Rowe said. “The officers went to approach the two men to speak to them and both subjects began to flee the officers.”

The subject being chased by Officer Barmer surrendered shortly after the chase began, resulting in the arrest of 21-year-old Jaquan Deloatch of Rich Square. He was charged with Resist, Delay, or Obstruct an Officer and placed under a $1,000 bond.

Rowe said that Sgt. Dilday eventually over took the other suspect.

“That suspect was on the ground, up against a house behind an air conditioner unit,” Rowe said. “The suspect would not show his hands to Sgt. Dilday. As Dilday deployed his Taser, the suspect made a throwing motion.  Dilday was able to get the subject under arrest.  It turns out the subject was actually throwing a handgun, a weapon recovered by Sgt. Dilday.”

Dilday charged Akeem J. Robinson, 21, of Como with possession of a firearm by a convicted felon, alter/remove the serial number on a firearm, and Resist, Delay and Obstruct an Officer. His bond was set at $50,000 secured.

WINDSOR – Thanks, but no thanks. The Bertie County Commissioners gave that message to the local school board Monday morning.... read more