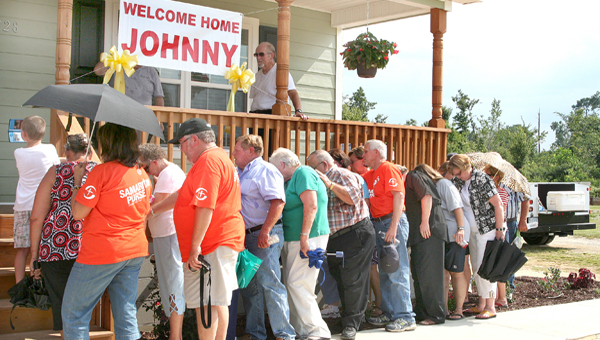 Members of Samaritan’s Purse join with others to offer a prayer of dedication of Johnny Mizelle’s new home in Bertie County. Staff Photo by Amanda VanDerBroek

COLERAIN – Trees here still bear the marks of a devastating storm, but two homes rebuilt with loving hands signify that the wounds are mending and life is continuing on in Bertie County.

On Friday, Samaritan’s Purse, a Christian humanitarian organization based out of Boone, dedicated the final two homes they helped construct after the April 16, 2011 twin tornadoes.

A large crowd of friends, family members and volunteers gathered to help dedicate the new homes of Chris and Dianne Freeman and Johnny Mizelle on Elm Grove Road and New Road.

“It feels wonderful to get them back in their homes, but it’s kind of difficult, kind of bittersweet, because it’s coming to an end,” said Artie Johnson, a case manager and logistics coordinator for Samaritan’s Purse. “Samaritan’s Purse has been a blessing to the community and to the people in the community.”

Over the past year the organization has help rebuild nine homes for families and individuals affected by the tornado through its Disaster Relief Program, relying on donations and the time of hundreds of volunteers.

“We are here because of what Jesus taught in Luke, Chapter 10, and one of the many parables he taught about was the one of the Good Samaritan,” said Steve Gahagan, program manager for the rebuild. “The Good Samaritan, we do not know a name, we don’t know much about him except one big thing: he was a man of compassion, and he was a man of compassion for someone he did not know. …That’s what we’ve based this on. This is why we do what we do, to help folks who need help and taking care of the situation and not expecting anything in return.” 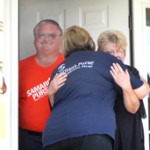 The former homes the Freeman family and Mizelle were completely destroyed during the storm, leaving them with nothing.

The Freemans were home when the tornado hit and took cover in their utility room located in the middle of the house.

Just up the road, Mizelle, while returning home, was in shock as he saw his house tossed to the opposite side of the road by violent winds. He was also spared injury.

During the dedication ceremonies, the Freemans and Mizelle were presented with several items, including a journal with words from all those who worked on their respective homes, a Bible, a plaque declaring their home “paid in full”, certificate of occupancy and finally the keys to their new homes.

“It’s wonderful (to be in our new home) because we really didn’t know what to do,” said Mrs. Freeman. “We had this opportunity, we put in for it, we were accepted and it was about the happiest I’ve ever been, I think. …(Those involved with Samaritan’s Purse) believe in their religion. They don’t just say they’re Christians, they live their religion, they really do.”

Gahagan said Mizelle was “hesitant” to let Samaritan’s Purse rebuild his home as he more concerned rather for his mother, Barbara, and her home that had been destroyed as well.

“We’re glad you allowed us to help you,” Gahagan said to Mizelle. “This is a day of celebration.”

When given “the porch” to speak, Mizelle noted how his life has been forever changed by the storm.

“When the storm came, I felt like something came over me and a whole lot of things have changed since then,” he said. “I’ve let the Lord come to my heart.”

He added he will never be able to give enough gratitude to those who worked on his home.

Mrs. Freeman said the experience of Samaritan’s Purse goes beyond getting a new home to making friends that will always have a special place in her family’s hearts.

“We have met so many wonderful people through this, getting the house is just part of it, but being able to meet all these people and seeing how good the world can be and is—that’s the amazing part,” she said.

GATESVILLE – Two measures currently in the works should prove beneficial to Gates County property owners. At their Aug. 1... read more