MURFREESBORO – For years, Lynn Johnson distinguished herself as a valuable member of the greater Murfreesboro community.

Last week, town officials here saluted Johnson for her numerous contributions as the former Murfreesboro Mayor (2003-09) was presented a Resolution of Appreciation.

“I was very honored to serve in any way I could to benefit this town and the greater community,” Johnson said upon accepting the resolution from current Murfreesboro Mayor John Hinton.

Johnson recently stepped down from her position as a member of the Mid-East Commission’s Board of Directors. She served that multi-county organization in the roles of vice president and president.

But of all the accolades she deserved, Johnson was praised for her foresight. It was Johnson that envisioned, organized and served as Chair of the Greater Murfreesboro Marketing Initiative, a group that brought together the four main pillars of the community – the town, the Historic Association, the Murfreesboro Chamber of Commerce and Chowan University.

Johnson served on the Chamber’s Board of Directors and the Board of Visitors at Chowan University, as well as numerous civic organizations – each with the vision to advance/improve the way of life in this historic Hertford County town.

While her efforts to promote Murfreesboro are well documented, Johnson’s contributions went beyond the town’s borders. She served as an officer and Director of the Choanoke Area Development Association, an organization dedicated to improving the quality of life in Hertford, Bertie, Northampton and Halifax counties. Johnson was also responsible for the formation and continued success of the Red Barn Farmers’ Market, an entity that serves the local agricultural community as an outlet for their produce.

“The Town Council of Murfreesboro expresses gratitude and appreciation to Mrs. Lynn W. Johnson for her distinguished, energetic leadership and service as economic advisor to the Mayor and administration in matters concerning development and promotion of Murfreesboro,” the resolution read.

In other action from the July 24 meeting, the Town Council:

*Held a public hearing and approved a special event permit for Bob Lee Jr. to block a short section of Holly Hill Road on Sept. 29 for a wedding reception;

*Approved a memorandum of agreement between the town and North Carolina DOT for the removal of debris from roads in the event of a natural disaster;

*Reappointed Rebecca Parrish to a three-year term on the Elizabeth Sewell Parker Memorial Library Board;

*Appointed Yvonne Warren to succeed Dr. Garth Faile on the Albemarle Regional Library Board of Trustees; and

*Appointed Town Administrator Brandon Holland as Murfreesboro’s representative on the Mid-East Commission and named Councilman Randy Roberts as an alternate. 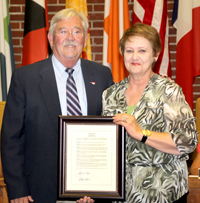 For her numerous contributions to the Town of Murfreesboro and other local organizations, Lynn Johnson was presented a Resolution of Appreciation on July 24 by members of the Murfreesboro Town Council, including Mayor John Hinton shown here with Johnson.

The financial impact for local families preparing to send their kids off to school or college will be a bit... read more