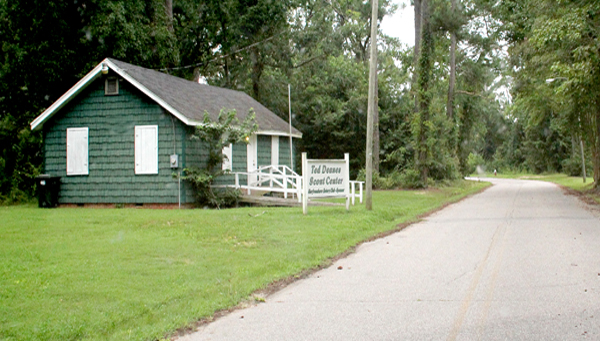 A plan to construct a cul-de-sac on Harrell Street near the Boy Scout Hut (left) has been delayed for the time being by the Murfreesboro Town Council. Staff Photo by Cal Bryant

MURFREESBORO – After listening to the pros and cons of closing a street to thru traffic, members of the Murfreesboro Town Council agreed to an alternate plan.

At their meeting here Tuesday evening, council members opted to accept a suggestion made by Murfreesboro Police Chief Darrell Rowe, which called for Harrell Street to be temporarily closed to thru traffic. The original plan was to construct a cul-de-sac at a point on Harrell Street near the Boy Scout Hut.

Rowe said he had received complaints about speeders on Harrell Street and dispatched an officer on June 27 to run radar between the hours of 5-6 p.m. In that one-hour period, the officer recorded the speed of 70 vehicles, noting the average speed was 26 mph. The fastest speed was 34 mph.

“I feel you will see an increase in speed in that area when the college students return,” Rowe stated. “I think the best way to test out this theory and to see both sides of this issue is to temporarily blocked Harrell Street for a short period of time after the Chowan students return next month. Let’s see if that increases the traffic and the speed on Lakeview or Woodridge. With that knowledge we can make a sound decision on how to handle this rather than just guessing.”

Councilwoman Sarah Wallace said that the town’s ordinance called for a 25 mph speed limit on all streets unless otherwise posted. She also referenced a safety issue for children and adults that walk across Harrell Street to reach the town park.

“If we decide to cul-de-sac that street, then the part of the street there now adjacent to the park can be made into parking for parents and their children to safely reach the park,” Wallace said. “From a safety issue that would be the easiest thing to do.”

“It might not be a bad idea to block the road once the students come back and see where all this traffic goes,” he stated. “Test it for a couple of weeks. This will help us make an informed decision. I’m all for making it safer there for our citizens and visitors.”

Councilwoman Gloria Odum motioned to accept Rowe’s recommendation and temporarily blocked Harrell Street shortly after the return of the Chowan students and check the traffic statistics caused by that closure. Roberts offered a second and the motion was approved by a 5-0 vote.

Prior to the council’s discussion and eventual vote, several Murfreesboro citizens spoke during a scheduled public hearing on the Harrell Street issue.

Hal Liverman, who has owned rental property on Harrell Street since the early 1990’s, said he is aware of the amount of traffic on that street, adding that some motorists did drive too fast, in his opinion, while others observed the speed limit.

“The volume of traffic and the speed of those drivers, I can’t see how it has improved any over the years,” Liverman stated. “With that curve there you can get run over real easily. You can’t see around that curve.”

Liverman said he was concerned about the safety of those renting his property and thusly favored placing a cul- de-sac on the street in an effort to address the problem.

Tricia Whitley said when she first moved to Harrell Street in 2006 the traffic wasn’t too bad.

“Now it’s very bad,” she stated. “I’m afraid to back out of my driveway; I’ve almost been hit several times by people coming around that curve. They come flying by my house. Also when I have company I’m afraid to have them park in front of my house because they may be hit by an automobile. It’s a very dangerous street and should be closed off for safety purposes. I’m in favor of a cul-de-sac.”

Shelly Mayle is also a Harrell Street resident and is concerned for the safety of her young children.

“I have noticed that the amount of traffic and the speed of that traffic has decreased this summer, but in my opinion I think we’ll see that increase in about three weeks,” Mayle said, noting the reopening of fall classes at Chowan University.

Mayle stressed that based on the safety of her family and others living on Harrell Street, she thought the cul-de-sac plan was a good idea.

“That plan will actually help our town’s recreation department,” Mayle stated. “With this street, which is a cut-through street to the Jenkins Center, closed to thru traffic, people can use that end of the street for parking and safely walk across the street to the town park.”

John Revelle of Holly Hill Road said he fully understood the opinions of those living on Harrell Street, but was concerned over how closing Harrell Street to thru traffic would impact other streets nearby.

“That traffic will find another way to get to Spring Avenue and on to the (US 158/258) bypass or wherever,” Revelle noted. “If you use High Street, that traffic will be passing 25 to 30 homes. If you use Woodridge Drive to Carolina Drive, you’re looking at passing 40 homes. The problem will still exist with the traffic. There will be more traffic put on those two streets. You need to keep in mind that more people will be affected by this.”

Revelle suggested keeping Harrell Street open and using speed bumps to slow down the speed of the traffic.

Brenda Davis said she has lived on Harrell Street for 50 years.

“There has always been a lot of traffic on that street, and there once was a lot of children living on that street, much more then than now, but no one ever got hit (by a vehicle),” she said. “One thing I noticed is there are no speed limit signs on that street.”

Davis said she was opposed to the idea of closing the street to thru traffic.

“We have school buses and garbage trucks that use Harrell Street, they would have to go down, turn around and come back,” she stressed. “Yes, I agree that there is an increase in the traffic on our street since the college opened the street there by the gym (for another access point to Chowan’s campus), but I don’t think the other traffic on the street are all college students.”

Another longtime resident of Harrell Street was also opposed to the installation of a cul-de-sac.

“My wife and I moved to Harrell Street 55 years ago and have raised three children there,” said W.D. Doughtie. “Other than an occasional speeder we’ve had no problems there. “Put some speed bumps and speed limit signs there and that should take care of things.”

Mayor Hinton read a letter from David Farnham regarding the Harrell Street issue. Farnham wrote that speeding in Murfreesboro was not limited only to Harrell Street. He expressed concern that by closing Harrell Street to thru traffic would cause an increase in traffic and perhaps incidents of speeding on High Street, Carolina Drive, Lakeview Drive and Woodridge Drive, thus impacting the residents of those streets. Farnham also suggested the use of speed bumps on Harrell Street.

After hearing the opinions of others, Liverman again asked to speak during the public hearing.

“Whether it be speed bumps, traffic signs, whatever, I would like to see the traffic slowed down on Harrell Street for the safety of others,” Liverman stated.

The issues surrounding Harrell Street have been discussed in previous meetings by the council and engineering plans were drawn for the changes to the street in 2010. The estimate on the project, according to the plans, is $31,300.

Those street modifications would include an asphalt cul-de-sac near the Boy Scout Hut blocking the thru-flow of traffic. Town Administrator Brandon Holland said the other portion of the street would be tailored to accommodate parking for recreational activities and for the Boy Scout Hut.