John P. Rankins Jr. has resigned locally and accepted the position of Human Resources Director in Harnett County. His last day of employment in Hertford County is July 27. 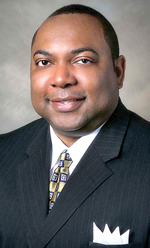 “It wasn’t an easy decision to make,” said Rankins, a Hertford County native who was named in November 2010 as the Assistant County Manager and HR Director. “It was a decision that came with a lot of thought and a lot of prayer.”

He added that one of the driving forces aiding the decision was his ongoing efforts to obtain a Master’s degree in divinity.

“I’m currently pursuing that degree at Shaw University; the time involved in that pursuit and the credits I’ve built to date will be easier to manage by moving closer to Raleigh,” Rankins noted. “I may even consider transferring to the Divinity School at Campbell University, right there in Harnett County.”

While he counts down the final few days of employment in Hertford County, Rankins said he was fortunate to have been associated with an excellent team of local government officials.

“By working in a smaller county you have the opportunity to get your hands into several different things, different areas of county government,” he stressed. “It’s not like that in a larger county, one where you only specialize in one area. Learning the basics here, the experience I gained here will help me once I start in Harnett County.”

Rankins said Harnett County was experiencing tremendous growth, partly due to its location near Wake County.

“Harnett is handling some of the outgrowth from Wake,” he said. “Their population is growing and so is their school system; they are on the verge of building three new schools there due to that growth. Plus they just built a new courthouse, sheriff’s office and detention center. Campbell University is in the process of adding a medical school….the county is growing by leaps and bounds; the county’s demographics are changing and I feel it’s a good place to be.

“I did plan to retire here in Hertford County, but plans do change. However, I’m telling my colleagues here to keep the lights on because I may be back one day,” Rankins concluded.

“I hate to see John leave, but I wish him well,” Williams said. “Everyone should avail themselves for opportunities to grow and John is doing exactly that with this move.

“I feel we’ve trained him well during his two years here,” Williams added. “The experience he gained here will prove beneficial.”

Williams stated she will meet with the county’s Board of Commissioners in an effort to quickly move forward with replacing Rankins.

After spending the majority of his adult life away from his boyhood home of Ahoskie, Rankins returned to his roots in 2008 when he accepted the position of Human Resources Director at Vidant Roanoke-Chowan Hospital.

He was no stranger to local government in Hertford County. Hired by former County Manager David Thompson, Rankins served a summer internship as part of his Public Administration studies at Winston-Salem State University. He worked with Patricia Weaver, a local government icon who retired in 2010 as the county’s Assistant Manager.

Rankins, the son of Margaret and Calvin Odom, is a 1985 graduate of Ahoskie High School. His uncle, Rev. Dr. Claude Odom, is a former Hertford County Commissioner who later became the Eastern Area Administrator for the NC Department of Juvenile Justice.

He has served as chairman of the Davie County Speakers Bureau as well as the Mayor’s Human Relations Commission for the City of Winston-Salem. He served a two-year term (1988-89) on the Winston-Salem State University Board of Trustees, representing the student body as its SGA President.