The bride is the daughter of Mr. and Mrs. Edward Lee Medlin of Murfreesboro. Grandparents are Mr. and Mrs. Willie C. Farmer of Aulander and the late Myrtice Medlin.

The bridegroom is the son of Mr. and Mrs. Teddy Sumner of Conway.

The bride was given in marriage by her parents and escorted by her father.

Ciara Sumner, daughter of the groom, was honorary attendant and Bandit, the family pet dog, served as ring bearer.

Immediately following the ceremony a reception was held at the Roanoke Chowan Shrine Club hosted by the bride’s parents.

Registry attendants at the reception were Casey Costner and Elizabeth Powell.

The bride is a 2000 graduate of Chowan University with a Bachelor degree in psychology and criminology. She is employed with the NC State Department of Community Corrections as a probation/parole officer II.

The groom is employed with the Town of Murfreesboro as captain of the Police Department.

The bride’s gown was a 1992 Casablanca, a shear organza over silky satin gown with lace accented with Swarvoski crystals, crystal sequins and silver beadwork. The neckline is a strapless sweetheart with Swarovski crystal buttons down the whole gown and has a ball gown silhouette.

An after rehearsal dinner was hosted on the eve of the wedding by friends of the bride and groom at the Hertford Academy. 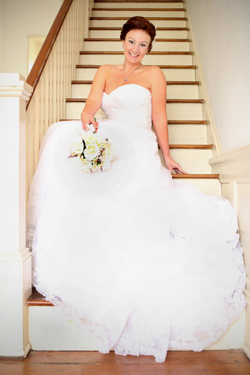