SUFFOLK,VA–  A Gates County man is behind bars here after being charged with the production of child pornography. 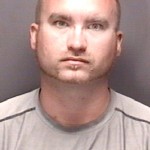 An investigation by the Suffolk Police Department Neighborhood Enforcement Team revealed that Mark Tracy Baines, Jr., age 31, of the 1100 block of Drum Hill Road in Gates allegedly attempted to solicit what he believed to be a minor to pose nude for photographs and participate in sexual activities.

Actually, Baines was communicating with law enforcement personnel on Facebook, believing he was chatting with a teenage girl. Baines claimed to be a part-time photographer operating under the name OBX HOTSHOTS and indicated he was looking for female models.

Baines was arrested Wednesday on charges of producing, distributing and financing child pornography and is being held without bond at Western Tidewater Regional Jail.

A search was performed of Baines’ residence. Several computers were seized.  Additional charges are possible.