WILLIAMSTON – MartinCountyis reaching out to help one of its own, Danyell Scott Williams. The Bear Grass native has suffered from cystic fibrosis since birth. Her parents were told she wouldn’t live more than three years. She’s now 30 years old and in needs a double lung transplant to stay alive.

Danyell is currently undergoing intensive treatment at Duke Medical Center in Durham. She and her husband Chad, a registered nurse in the surgical Intensive Care Unit at Vidant Medical Center in Greenville, moved to Durham in March to be closer to the medical facility and rehabilitation center in preparation for the transplant.

Danyell needs round-the-clock care. Chad works 12-hour shifts at the hospital so that he can be with his wife in Durham several days at a time. Danyell’s mom, Ann, stays with her other days.

The Raleigh-based Bluegrass band Kickin’ Grass will perform in concert.

Danyell graduated with the Bear Grass High School Class of 2000, despite the fact that her illness kept her out of school 85 percent of the time.

Her father, Danny, is a familiar face in Martin County. He used to be the All State Insurance agent for the area.

“My parents made my life as normal as possible,” she said. “I kept up my school work at home and never had to repeat a grade.” 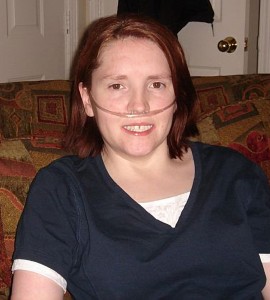 A July 22 Bluegrass concert in Williamston will benefit Danyell Scott Williams, who has suffered from cystic fibrosis since birth and is now in need of a double lung transplant. Photo contributed by Brenda Monty

Danyell went on to attend Martin Community College, where she obtained two associate degrees in information systems and Internet technology. She graduated with honors in 2004 and married Chad in October of 2005.

She was able to hold down an office job in Windsorfor about three years before her health worsened.

Her only hope now is a double lung transplant.

“It’s not as simple as I want some lungs, and ok, here they are,” Danyell said.

She has to visit doctors as many as three times a week. She is on oxygen 24 hours a day and undergoes breathing treatments for about two hours daily in the morning and evening. Then, in order to keep her body strong and fit for transplant, Danyell goes to a rehab center for about four hours every day for rigorous exercise.

As if that’s not strenuous enough, Danyell is dealing with two other medical conditions that require extraordinary care. She was born with a digestive disorder that prevents her body from producing the enzymes that break down her food into the nutrients she needs. While others in life often struggle to keep their weight down, Danyell has to fight to keep hers up. This requires medication, but it also means she must eat twice as much as normal to get the same results.

On top of all that, several months ago Danyell developed diabetes that is directly related to the cystic fibrosis.

How does she deal with it all?

Although she has an inherent endurance simply due to her circumstances, Danyell is also a spiritual person.

“I’ve always been sick, so I don’t know any other way,” she said. “I was raised with a strong faith, and my family,Chad and the church have been a real blessing.”

Danyell has also learned a valuable lesson in life: Never ask yourself  ‘What else can go wrong?’ because you will find out.

For example, although Danyell is fit and for all intents and purposes a candidate for the transplant, she now has a bacteria in her lungs, which must be treated prior to surgery. Sadly, medications used for treating the lung infection have created side effects, which must be dealt with, along with the need to try new medications.

“It’s a one step forward and two steps back kind of thing,” she said.

Once the lung infection clears up, she will be added to the national transplant list. The wait could be days or a month or longer.

And because the lungs are more susceptible to foreign matter being breathed into the body, even after the transplant, Danyell will have to remain forever careful in order to protect her health. In order for her body not to reject the transplant, her body’s natural immune system must be killed. This puts her at serious risk for any airborne infection, even from something as minor as dust from her cat’s litter box.

“Even a common cold could kill me,” she said. “There’s a lot of risks, but being able to breathe is worth it.”

Fellow patients at the medical center are also an inspiration to her.

“I haven’t met anyone up here that has regretted doing it,” she noted. “I know I’m on a lot of prayer lists and that’s a huge blessing. This journey is a huge undertaking, but there’s a lot of people here doing it and so can I.”

If all goes well, Danyell andChadhope to be at the benefit concert on Sunday, July 22.

Tickets for the event to be held at Martin County Auditorium are $10 for adults and $6 for children, and are available at Dixie Motor Company, Corey’s or Mast Pharmacy in Williamston. For more information on the fundraising event or how to donate, call 792-3360 or 799-6331.

When the five-member bluegrass band takes the stage, audiences are instantly captivated by pure, strong voices telling true-to-life stories spiced with innovative bluegrass instrumentation. Listeners fall in love with the rootsy,Americanastyle, and can’t wait for more.

The Kickin’ Grass Band maintains a steady touring schedule across North America and has made appearances in Canada, Arizona, New York, New Hampshire, New Jersey, Pennsylvania, Florida and all across North Carolina and the Piedmont.

The band got its start in 2002 as the accompanying band for the Apple Chill Cloggers. Since then, they have released three albums of original and traditional music – Backroads (2003), On the Short Rows (2006, and Kickin Grass Band (2008). A fourth album is due to be released this year.

For a sampling of music by Kickin Grass, go online to: http://kickingrass.com/albums.

(Brenda Monty is a Staff Writer/Photographer for The Enterprise in Williamston and the article and photo are republished with her permission.)

AHOSKIE – Don’t be tricked by an apparent scheme that targets customers of utility companies across the nation. Officials with... read more