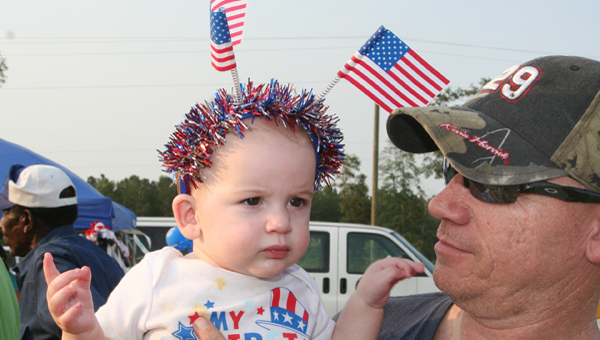 Dylan Keeter of Pleasant Hill, held by his father Preston, shows his patriotic pride at the 4th of July Spectacular held at the Northampton County Cultural and Wellness Center. Staff Photo by Amanda VanDerBroek

JACKSON – Organizers of Northampton County’s 4th of July Spectacular are calling it the largest the county has ever seen.

On Wednesday, county citizens and visitors from neighboring areas packed the Northampton County Cultural and Wellness Center, near Jackson, for the event which featured musical entertainment, food, activities for children and—perhaps the most important aspect of an Independence Day celebration—fireworks.

Northampton County Chamber of Commerce Judy Collier estimated the crowd to be more than 4,000, including those who came just for the fireworks.

“People were parked all the way into Jackson,” Collier said. “My estimate is that it’s the largest event Northampton has ever had.”

“I am very excited and pleased with the outcome,” he said. “Our county has needed this type of event for years. It proved to be a true family event. …Young and old seemed to enjoy every part of the evening. The fireworks lived up to the billing as they truly were ‘spectacular’.”

Bolton said the event highlighted the potential the Cultural and Wellness Center on the cultural side.

“I just hope the county officials realize the potential of these events and the use of the Cultural and Wellness Center grounds” he said. “We should ask the architect that has designed phase II of the complex to figure out a place on the grounds to install a permanent stage with a cover. That will allow the county to expand on the cultural side of the intended use.”

He thanked the vendors, those who provided entertainment, including “Shaggin’ on the Beach” DJ Jay Jenkins, who emceed.

Collier said she was glad citizens of the county took advantage of the event.

“I’m so glad to see the citizens come and thoroughly enjoy themselves,” she said.

Collier said she intends to start planning the event again for next year within a few weeks.