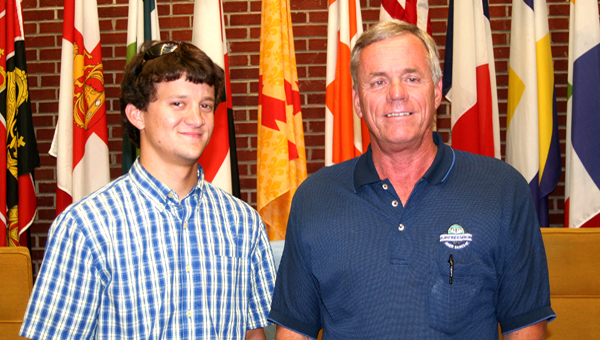 MURFREESBORO – After 22 years on the job, Murfreesboro Waste Water Treatment Plant Director Ben Warren is saying goodbye to his job and hello to retirement.

Parker, of Como, graduated with a bachelor’s degree in environmental biology from Chowan University last year before taking a job with Camden County Soil and Water Conservation.

Warren’s retirement is not effective until January 1, but in the meantime Parker will get a crash course in what happens across the Meherrin River at the Waste Water Treatment Plant.

Warren said he’s going to miss those he works with as well as the citizens. However, he intends to spend his retirement in Murfreesboro—his hometown.

“I’m not going anywhere. I still live in town. I’ve lived here all of my life,” he said. “I’ll still be connected for many years to come.”

Warren said he’ll still be connected to the Waste Water Treatment Plant as well which has been under his responsibility for many years. He oversees the operations at the plant which not only treats waste water and irrigates it to surrounding land, but focuses on maintaining hundreds of acres of forest and cultivating Bermuda grass for horse and cattle feed. There is a portion of the river front where wildlife is managed as well.

“I’ve worked long and hard to bring it to where it is now and it’s going to take a lot to keep it where it’s at,” he said.

Warren said he’ll be staying active in the Wastewater Water Treatment Plant Director role until Parker and the department’s other employees receive the mandatory state certifications.

Parker said he’s ready to take on the task and is excited about his new position.

“I think there’s a lot to be learned, but I think it will be fun,” he said.

Parker said he took the job because he wanted to stay close to home. He said he was raised in Murfreesboro before moving to Como.

Warren said he believes the right person has been hired for the job.

“I think we’ve chosen a nice person, he’s got a lot of education—he’s going to teach me a lot,” he quipped.

Warren said he’s looking forward to retirement even though there’s a long “honey do” list waiting at home.

“I’ve got a lot to do at home that I’ve been putting off for a long time,” he said.

WINDSOR – It’s sometimes about what comes to those who wait. Ahoskie’s American Legion Post 102 and Windsor’s Post 37baseball... read more