NORFOLK, Va. – A federal inmate convicted last year for a string of armed robberies, including a pair of heists in Gates County, now stands charged in the murder of a law enforcement officer.

On Monday, Norfolk (VA) Police detectives filed first-degree murder and robbery charges against 20-year-old Raymond Lewis Perry. Those charges are in connection with the death of Norfolk Police Officer Victor Decker, who was off-duty when his body was discovered Oct. 26, 2010 lying adjacent to Oceana Boulevard. 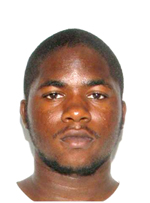 That slaying came one month after Perry and two others – Wade Anderson Watford, 36, and Travis Knight, age 17 – pulled off two robberies in Gates County. At that time, Gates County Sheriff Ed Webb said Watford had ties to the local area, attending public school at one time in the county.

In early September of 2010, two armed suspects entered the Family Foods in Gates through a rear door and accosted two store employees as they made their way into the main part of the business. There, one shot was fired, although no one was injured.

At the time there were a total of 14 individuals (customers and staff) in the store.

The suspects robbed two cash registers, ransacked the store office and loaded the pilfered items, including 29 cartons of Newport cigarettes and a pocketbook of one of the employees, into a shopping cart and exited the store through the rear door. They were last seen walking down a path (the old railroad bed) into a wooded area behind the left side of the store.

Four days later, two black males, each dressed in military-style camouflage apparel, came in the front door of the Family Foods store located on NC 32 north in Corapeake. Both men were armed (a long rifle and a handgun).

At the time of that robbery, two employees and one customer, accompanied by a small child, were in the store.

One of the suspects went to the checkout counter and ordered the clerk to open the cash register from where an undisclosed amount of money was taken.

The suspects attempted to have the employees open the store office, apparently in an effort to gain access to the store’s safe, but neither had a key.

By the end of September, Watford and Knight were behind bars and law enforcement officers in both states were looking for Perry, who was later arrested.

“This shows you the violent nature of criminal activity,” said Webb on Tuesday of this week after learning of the murder charges lodged against Perry. “Fortunately, there was no loss of life or serious injuries involved in either of the robberies here in our county, but that reality is present whenever a weapon is in the hands of a desperate criminal.”

He continued, “Just stop and think about this for a moment….if a person will shoot and kill a law enforcement officer, what stops him from doing the same to an innocent citizen? Again, we were very fortunate that a store employee or a customer wasn’t murdered in the robberies here.”

Webb also stated that these recent charges against Perry will bring some measure of closure to the family of Officer Decker as well as to the law enforcement community.

“His family, to include a wife and a two-year-old daughter, has been left to wonder for nearly two years of who killed their loved one,” Webb said. “While the news of Perry’s arrest does drag up bitter memories of that day, it does help them answer some questions. It also helps us as law enforcement officers, knowing that no matter how long it takes you cannot outrun the long arm of the law. I appreciate the continued efforts of the Norfolk Police to bring this murderer to justice.”

“Since these crimes occurred in two states, we decided it was best for the federal authorities to take it over,” Webb said of the reason why Perry and his partner in crime were not tried in Gates County. “Plus, with a federal sentence, it’s day for day as far as time served.”

At the time of the murder charges being filed Monday, Perry was serving a 96-year sentence at a federal prison in Bennettsville, S.C.

JACKSON – Insurance will likely pay for damages to county-owned structures damaged during a strong thunderstorm that blew through Northampton... read more