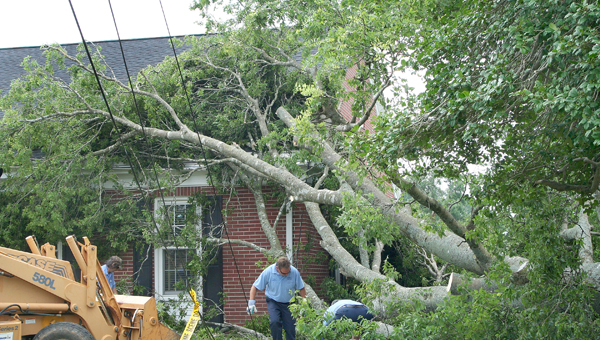 Amid downed power lines, crews work to remove a tree that fell Sunday on a section of the Northampton Memorial Library in Jackson. Staff Photo by Amanda VanDerBroek

JACKSON – Powerful winds from a severe thunderstorm had citizens here picking up the pieces.

On Sunday numerous trees were toppled over, damaging homes as straight line winds ripped through. The entire town was left without power.

“It was very, very abrupt,” said Mayor Jim Gossip. “It came out of nowhere. We saw a little bit of wind and within two or three minutes it swept through and it only lasted a few minutes.”

Gossip said the damage was widespread around town to both residential and commercial structures. The storm resulted in a few area homes losing portions of their roofs. The Northampton Memorial Library sustained facial damage from a fallen tree and the awning of a service station was blown off.

At Bryant Farm, just outside the town limits, a metal storage barn was leveled.

Following the storm, both US 158 and NC 305 were blocked by fallen trees and crews began immediately to clear those two roads.

“We knew we had to get those arteries open for emergency vehicles,” Gossip said.

He said Monday morning eight Dominion Resource teams were out working on restoring power around.

He said he wasn’t sure the damage was enough to meet the aid threshold.

However, Gossip said Jackson officials did declare a state of emergency in case the town could be eligible.

“If there’s any possibility at all to receive any federal or state funds, you must go through that declaration,” Gossip said. “That’s probably going to be contingent upon how widespread (the damage is in the region).”

According to Storey, Jackson took the brunt of Sunday’s storm which whipped through Northampton County at approximately 6 p.m.

Storey said there were reports of downed trees and power lines, and damage in Woodland and Garysburg.

Woodland had damage to trees and power lines on Main Street near Cedar Grove Friends Meeting. The strong winds also apparently sheered the front porch off of a home on Main Street.

At 11 a.m. on Monday the Northampton County Cultural and Wellness Center was open as a cooling center for citizens without power.

As of 3 p.m., Storey said power had been restored to most of Jackson with the exception of portions of Bryantown Road and Calhoon Street. He estimate approximately 100 residents were without power.

The power outage in Jackson cancelled Monday’s scheduled court proceedings and postponed the Northampton County Board of Commissioners meeting until Tuesday at 10 a.m.

The Northampton County Board of Education also postponed their regular meeting to a later date yet to be announced.

The sounds of chainsaws replaced the normal Monday hustle and bustle around the county seat as residents, power crews and town workers began to clean up.

Gossip advised residents to take photographs for insurance claim purposes before beginning to clean up their property.

Small branches and debris can be placed on the curb for town pick up.

“It’s going to take awhile because there’s a lot of debris,” Gossip said of town’s limb pick up service.

He added whole trees will need to be removed and discarded by a tree surgeon.

Gossip said the town, as it has in the past, came together to help each other out.

“Everybody chips in,” said Gossip. “The spirit of cooperation is just tremendous.”

Gossip said there were no incidences of crime or mischief. No injuries were reported in the county.

County officials urged those who live in Northampton County to sign up for the DeltAlert system, which is offered to citizens in order to alert them to inclement weather, boil water advisories and other urgent messages via telephone.

A link to sign your household up for the urgent messages is available on http://www.northamptonnc.com/. For those who do not have Internet service you can sign up by calling 574-0214.