The bride is the daughter of Mr. and Mrs. James Timothy Wetherington of Benson and Ms. Jan Ormond of Dover.  She is the granddaughter of Mrs. Audrey Hart of Dover, Mr. Ben Ormond and Ms. Sue Hart of Smithfield, Mrs. Faye Sutton of Cove City, and the late James Elbert Wetherington.

The bride was given in marriage by her parents and escorted by her father.

Mrs. Jenny Nichole Odom, sister of the bride, served as matron of honor.  Bridesmaids were Mrs. Kristen Ashley Barefoot of Newton Grove, Miss Heather Brooke Pope of Smithfield, both friends of the bride, and Mrs. Samee Jo Miller of Kinston, cousin of the bride.

The groom’s father served as best man.  Groomsmen were Zachary Thomas Vinson of Murfreesboro and Joshua Bryant Vinson of Greenville, brothers of the groom, Rufus Jennings White IV, Jordan Ransom White, and Larry Brent Mann, all of Pendleton and friends of the groom.

Serving as flower girl was Leila Jordan Miller of Kinston, cousin of the bride.  The ring bearer was Tyler Brent Mann of Pendleton.

Immediately following the ceremony, a reception and dance hosted by the bride’s parents was held at The Royal Banquet in Raleigh.

An after-rehearsal dinner was hosted on the eve of the wedding by the groom’s parents at Lake Wheeler Park Waterfront Program Center in Raleigh.

The bride and groom are both 2010 graduates of North Carolina State University with bachelors’ degrees in animal science.  They are employed with companies in Research Triangle Park.

After a honeymoon trip to Jamaica, the couple now resides in Knightdale.

January 14 – A Pampered Chef shower was given by Miss Aimee Rouse at First Free Will Baptist Church in Smithfield.

February 19 – A bridal shower was hosted by Mrs. Annette Wetherington and Miss Lauren Beavers at the Wetherington home in Benson.

March 16 – A bachelor weekend was given by the groomsmen at Myrtle Beach, S.C.

March 18 – An “Around the Year” shower was hosted by the bride’s mother and bridesmaids at First Free Will Baptist Church in Smithfield.

March 23 – A bachelorette weekend was given by the matron of honor and the bridesmaids at Valle Crucis.

March 31 – A Celebration Dinner was held at John’s Seafood and Steaks in Murfreesboro and was hosted by Joel and Ann Bennett, Tom and Debbie Edwards, A. B. and Ruth Anne Flanagan, and Charles and Denise Futrell. 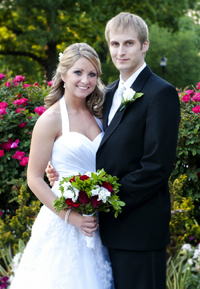