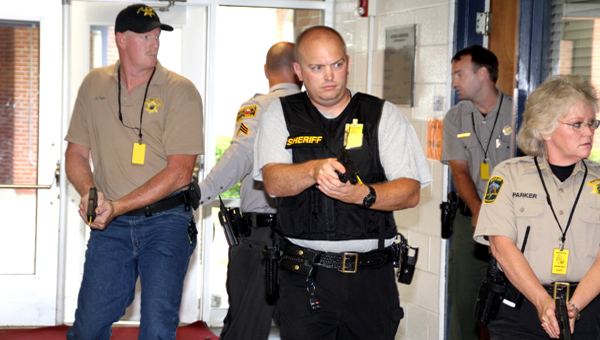 GATESVILLE – It was only a drill, but the reality of a school related shooting was played out here Monday afternoon.

All the elements of such a catastrophic event – sad scenes that are much too often reported in today’s world – were present: the loud pop of artificial gunfire, a smoke filled hallway, schoolchildren (portrayed by adults in this scenario) hunkered down behind locked doors in their classrooms, screams for help, human carnage littering the halls, and law enforcement officers, with weapons drawn, performing a slow and meticulous search for a shooter.

“This was not a show, it wasn’t intended to be a show, but rather an exercise that served the purpose of testing Gates County emergency responders in the event such an occurrence unfolds here,” said Gates County Emergency Management Director Billy Winn who served as the lead administrator of the two hour drill held at Central Middle School.

School protocol was followed from the outset of the mock shooting. The intercom blared the announcement of a “code red” lockdown – ordering teachers and students to get to the nearest classroom and lock the door.

Shortly thereafter, a simulated Gates County Communications was broadcast to all cars in service that a shooting had occurred on the 7th grade hall at the school. A few minutes later, additional shots rang out; law enforcement officers en route to the scene were advised that two suspects, both seen wearing black masks, were observed in a hallway. That prompted a mock call for additional help from surrounding counties.

Upon the arrival of law enforcement officers, they eased their way into the school, splitting up in four to five member teams to begin their search of the shooters, securing each hallway and room as they passed. The two suspects were later “fatally wounded” in an exchange of mock gunfire with the officers, who then began the task of returning to escort the unharmed victims outside while leading medical responders in to care for the wounded.

The exercise also proved valuable for EMT’s. Using what Winn described as a state-approved SMART system, each of the wounded were tagged with one of four color-coded cards – green (minor wounds), yellow (mild), red (serious) and black (deceased). The school’s gym was used as the main triage area. The victims were taken to mats bearing the same four colors which aided in the medical treatment process.

“In a mass casualty situation you first have to define the severity of the injury,” Winn noted. “This actually goes against what EMT’s are trained to do….that to treat what’s in front of them and load and go (in an ambulance). Drills like this teach them to handle things differently.”

“It was a good test for them,” Winn said. “Many of these officers have gone through live shooter exercises before, some more recently than others, but it’s always good to stay on your toes and be ready for incidents such as this.”

“We had over 300 participants from the school system,” Winn said. “They all followed the protocol they’ve been taught in their seminars and drills.

“I would like to use this opportunity to thank the school system as a whole, but especially Adrienne Bradley, (Superintendent) Dr. (Barry) Williams and the school board,” Winn added. “They gave us their blessings to conduct this drill and use one of their facilities. And I need to thank the administration and staff here at Central Middle School. They took the bull by the horns from the outset of us putting this drill together and worked hard to make it work. Even the custodians here wouldn’t let us clean up in the aftermath; they handled that themselves.”

“This was a worthwhile event,” said Bradley. “I’d rather for us to go through this as a drill rather than a real event, but practice makes perfect.”

For the school system, the exercise provided a strategic evaluation and facilities audit used to identify emerging and potential school safety problems. These activities identify the practices and places that are overlooked due a lack of understanding or an assumption that they are safe and trouble free.

“Without safe schools, it is difficult, if not impossible for learning to take place,” said Dr. Williams. “No task is more important than creating safe learning environments for our district’s children.  A safe school is in place when students can learn and teachers can teach in a warm and welcoming environment free of threats, intimidation, violence and fear.”

Williams added, “A school safety drill/exercise highlights and reinforces what your school is doing right to keep students safe and provides direction in those areas that need improvement.”

Winn wanted to make it clear, just as he did during the briefing session held prior to the event, that even though the law enforcement officers were using their service weapons during the drill, no live ammunition was allowed inside the school.

“Safety was paramount in this drill,” he stressed. “We were able to bring in two firearms specialists from the Chowan County Sheriff’s Office and they ensured all weapons were suppressed, meaning an object was used to block the weapon’s barrel to be on the safe side.”

Winn’s overall assessment of the drill was that it was a huge success.

“We bit off a lot to chew on by combining three elements into one drill – the school system, law enforcement and EMT/emergency management; we tested the entire system,” Winn stated. “We put all our cards on the table at one time, that kind of exposed some things, things you wouldn’t have seen if this was an individual exercise.”

Looking back on Monday’s drill, Winn said he saw a need to follow up with additional law enforcement training.

“There are some things that need fine tuning; it’s just a simple case of practicing and learning,” he said. “A drill is the perfect time to find the things we need to work on.”

“The unsung heroes were my CERT (Community Emergency Response Team) members, they worked hard for months to get this done,” Winn stressed of the approximately 20 local citizens who volunteer their time to serve on such a crucial piece of the emergency management puzzle.

The drill was funded by a $5,350 grant to Gates County from NC Emergency Management through its Department of Public Safety.

“We learned a lot in a simulated environment that we attempted to make as real as possible,” Winn concluded. “I hope the biggest thing we learned is that we can never let our guard down. We can’t get into a mindset that school related shootings are only restricted to inner city or urban area schools and can never occur in a small rural county like ours. Each and every community, big and small, across our nation needs to prepare for events of this magnitude.”