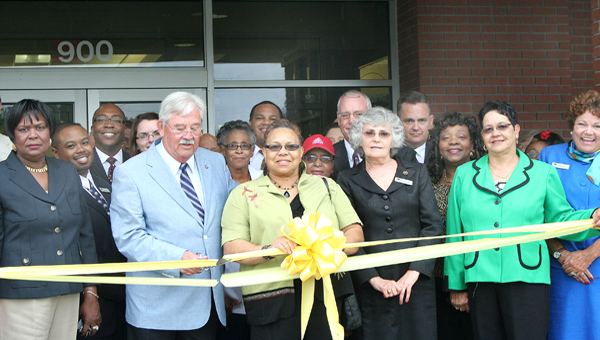 Led by Murfreesboro Mayor John Hinton (left), dignitaries with SECU and others gather for the official ribbon cutting of the new facility in Murfreesboro. Staff Photo by Amanda VanDerBroek

MURFREESBORO – The Murfreesboro branch of the State Employees Credit Union (SECU) has finally moved into its permanent home here.

On Wednesday an open house and ribbon cutting was hosted at the new facility located just across Main Street from its former location. It is the second SECU facility, and the largest, to be completed along Highway 158. One was just finished last year in Jackson and another is currently being constructed in Gatesville, slated for completion in September.

The new facility is more than 6,600 square feet and offers SECU members a state-of-the-art facility with a drive thru to conduct their financial business.

“It just gives us an opportunity to serve more folks,” said Murfreesboro SECU Manager Dell Aycock. “It’s all about taking care of my members and what we can offer them and that’s the reason why we’re here.”

She added it allows the Murfreesboro branch to grow in the future and provides employees with more space and new equipment.

McKinley Wooten, chairman of the SECU Board of Directors in Raleigh, said in less than a week SECU will turn 75 years old. In 1937, 17 state employees and teachers came together and formed the credit union. Now over 75 years later the credit union has grown $1.6 million members and assets now at $25 billion.

“The great thing about the credit union is that you can be a member here and whether you have $100 or $100,000 you’re treated just the same and that’s a testament of the good work done by the credit union,” he said.

Senior Executive Vice President Bobby Hall thanked those in attendance as well as Aycock for their hospitality.

“I told her (Aycock) to invite everybody in town and she did,” Hall said.

He noted how SECU has grown over the years and is now the second largest in the nation.

“One of the challenges we have as we get bigger is to not act like we’re big, to continue to know our members personally, and the way we do that is with our branch offices,” he said.

Hall said there are 243 branches statewide and there is a branch of SECU in each county in the state.

“The members that use (their local) branch, I have always said they could care less if we’re the second largest credit union in the nation, what they really care about is having a place where they are known personally and someone genuinely cares about them,” he said. “We’re a non-profit cooperative, so our whole purpose in life is to help our members improve their financial well-being and, not to do anything great for the credit union, but do things that are great for our individual members.”

Hall concluded by saying SECU feels good about what is going on at the Murfreesboro branch and is happy to have the new facility in town.

“We’re very proud to be a part of your community,” he said.

District Executive Vice President James Eure thanked those that gathered for the event and recalled how Aycock was hired originally to the Ahoskie branch by long-term employee Nancy Paul while he was on vacation.

“When I got back I got a surprise,” he said. “It’s a true experience every time you deal with Dell.”

Eure said Aycock worked for several years at the Ahoskie branch, all the while reminding him Murfreesboro needed a SECU branch of their own.

“We finally did, and we’re so proud to have named her manager over here and she has done a wonderful job in Murfreesboro,” he said.

“A building is really just bricks and mortar until people actually come in and breathe life into the structure and, I think every one would agree, the staff here at this credit union is outstanding,” he said. “I would like for you (Wooten) and Mr. Hall to understand that we feel every confidence in the world in them, they are a very competent group, they are dedicated to the credit union and each member is served with skill and understanding. The staff of this credit union are vital to this community because they are leaders, they are leaders in our churches, they are leaders in our civic organizations and they play a vital role in making Murfreesboro what I call an oasis on the Meherrin.”

Aycock thanked everyone for coming and reminded members that the new facility is for them.

“As you know as member owners it’s your place too because we’re in this together,” she said.

She also thanked the branch’s advisory board.

“These folks are play vital role in making the branch operate and run smoothly, come up with ideas,” she said. “They’re volunteers and they give up their time generously and we appreciate every one of them.”

Aycock also thanked her staff members for their hard work.

WINTON – An internal investigation performed on an employee of Hertford County Public Schools did not result in the need... read more