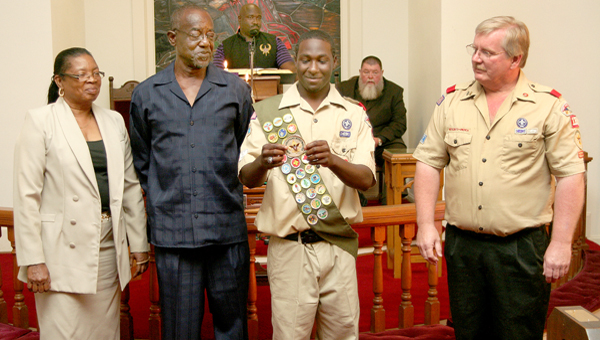 Andre Bass proudly displays one of the badges he earned as part of his inclusion into the ranks of an Eagle Scout. He is shown with his grandparents, Thelma and Rudolph Bass at left and Boy Scout Troop #135 Scoutmaster Donald Worrell (right). Staff Photo by Amanda VanDerBroek

COLERAIN – Determination may get you places, but drive and encouragement will give you momentum.

On Saturday evening, Andre Bass, 18, of Trap became an Eagle Scout as he stood before family and friends in the Colerain United Methodist Church as a testament of his own determination and of his grandparents’ nurturing.

During an Eagle Court of Honor Ceremony at the church, Bass became the third Eagle Scout produced by Colerain Boy Scout Troop 135 and the first African-American to achieve the rank in Bertie County.

“All who know you rejoice in your achievement,” said the Rev. Walter Johnston, who presided over the ceremony along with Greater Wynns Baptist Church Bishop Thomas Lee. “Your position, as you well know, is one of honor and responsibility and you are now a marked man.”

Troop 135 Scoutmaster Donald Worrell presented Bass with his Eagle honors along with an Assistant Junior Scoutmaster badge. The honoree’s grandparents, Thelma and Rudolph Bass Jr., were also presented with a mother and father pin, respectively. Mr. Bass was also given the mentor pin for guiding his grandson through the Eagle Scout Project.

He added Bass joins only a handful of African-Americans in the district who have earned Eagle Scout rank.

According to Lanouette, to achieve Eagle Scout you have to go through all the other scouting ranks, earn different merit badges (some required for Eagle), prove leadership roles within the troop and complete an Eagle Scout project, in which the scout must raise the funding themselves.

“It’s very tough, as Andre said, it takes a lot of time commitment and you have to keep at it, but there’s a lot of support out there for youth to get Eagle Scout they just need to look for it,” he said.

“I really wanted to do something to help the community, and I was thinking of a way to give back to the church,” he said.

A chicken and fish dinner, a raffle, hot dog sales and donations helped support the project. Bass said through those activities he was able to raise enough for the bench and had enough excess funds to donate to Troop 135.

“He doesn’t do things small, he does things big,” said Mrs. Worrell.

Bass didn’t have to look far for support in his eight year journey in Boy Scouts. He credits his grandparents (whom he refers to as his parents) for much of his achievement. They have raised Andre since he was an infant and urged their grandson to follow through with his scouting work.

“They were my main support, especially my grandfather, he pushed me along the way. He told me to never give up,” Bass said. “(They’re) wonderful, I can’t even explain my parents, they’re outstanding, they’re motivators, they always strive for the best, and I’m going to continue to be the best that I can be.”

Like any proud grandparents, Mr. and Mrs. Bass were elated with Andre’s feat.

“He’s really enjoyed being in Troop 135,” Mrs. Bass said. “From the beginning, Donald and Rhonda Worrell they’ve been with him every step of the way, they’ve been so supportive of him and his accomplishments. It’s been a journey, but it’s been wonderful. It’s been really, really nice.”

Mr. Bass attended and helped Andre with many scouting trips and endeavors. He recalled all the “nights in the woods” while camping with his grandson, always making sure Andre had the proper equipment and supplies for his scouting activities.

“It’s been a great accomplishment, it’s been hard work,” he said of his grandson’s long term goal. “I’ve learned just as much as he’s learned.”

Andre said scouting has brought a sense of responsibility into his life and has taught him to make wise decisions. He encourages up and coming scouts to stick with the program and utilize it to their advantage.

As for the future, Bass said he’s thinking about joining the Marines because he wants to serve his country. He plans to stay involved in scouting by being a leader.

“So far, being Eagle Scout is the best that I can be, but I know I can be even better, so I won’t stop with just that,” he said.