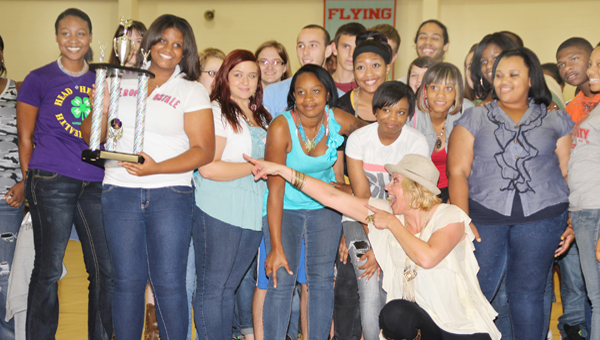 GATESVILLE – In the end there was only one – Gates County High School.

As part of an online and on air contest, Dixie 105.7 FM hosted the “Last School Standing” contest among 13 high schools that are located within the radio station’s coverage area.

“In order to win the contest the school had to receive the most votes,” said Ray Turner who hosts the 105.7 FM morning show and also serves the station, based in Nags Head, as its Program Director.

Turner added that the contest was stretched over a period of several weeks, with one school (receiving the least number of votes) “expelled” weekly.

“The school that survived to the very end was named as the Last School Standing and earned a trophy and a visit from a country music artist,” Turner said.

That artist was country music newcomer Gwen Sebastian. She was featured on the latest season of “The Voice” (on NBC) where she was among the final 48 contestants and was chosen by country music legend Blake Shelton, with whom she is currently on tour.

Sebastian, a North Dakota native, grew up in a farming town of just 800 people while fostering her love of music by watching her parents play local gigs at night. Her musical favorites range from Garth Brooks to Lady Gaga.

“She has a new single – “Met Him in a Motel Room” – that is doing quite well on the charts,” Turner said.

He added that the contest idea was a first for the radio station and was a success.

“It was fantastic; there were a lot of votes and Gates County High School won this contest by a wide margin,” Turner stated. “They apparently had a lot of alumni support and that’s key to the success of any school, no matter its size.”

On Thursday of last week, Turner was greeted by rousing applause and cheers upon making the official presentation to a gym full of GCHS students, faculty, administrators and staff.

“We received word from Holmes High School over in Edenton that they would walk away with this contest,” said Turner as he spoke to the assembled crowd. “Do you know what happened? Thanks to the students, the faculty and the alumni, Gates County High School walked away with the win by over 10,000 votes. You guys are awesome.”

Sebastian then entertained the crowd with a selection of four songs. She proved to be not only a great singer, but an entertainer as well by interacting with the students, often climbing the gym bleachers during her songs to sing face to face with the star-struck youngsters. On a couple of those bleacher visits she plopped down with the students to pose for photos.

“I love country music,” she said. “I think the main reason is that country music has a story to tell. People go through tough times, but you always need to remember there’s hope waiting for you down the road. Country music often relays that message of hope.”

Sebastian spoke of her appreciation to Shelton for taking her out on the road and experience the thrill of taking part in a live concert in front of tens of thousands of screaming fans.

“He has given me an opportunity I thought I’d never have,” she noted. “I thank him for allowing me to share my music. Blake Shelton isn’t just a singer, he’s a true performer by making everyone feel like they’re a part of the show.”

Following her performance Sebastian conducted a question and answer session with the students. Among the questions she fielded concerned what life on tour was like; at what age did she start singing (age 4); did she have a boyfriend (yes; the drummer in her tour band); and what was her favorite song (Don Henley’s “Heart of the Matter”).

She thanked GCHS for making her feel at home, saying that when growing up in her small town she always complained there was nothing to do…..“But now I know there’s no place like home.”

WOODLAND – The Woodland Board of Adjustments denied an application for a conditional use permit to open an electronic gaming... read more