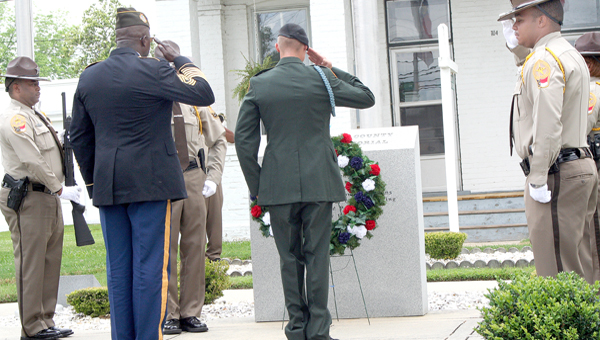 With members of the Northampton County Sheriff’s Office serving as the Honor Guard, U.S. military veterans George Reed (left) and Corey Payne (right) salute after positioning a wreath on Monday in front of the permanent monument located on the Courthouse Square in Jackson. Staff Photo by Amanda VanDerBroek

JACKSON – Gone are those who lost their lives on the battlefield, but never are they forgotten.

On Monday, during Northampton County’s annual Memorial Day service held at the Courthouse Square, citizens reflected on those who paid the ultimate price while serving in the United States Armed Forces.

“Many Americans view Memorial Day as the unofficial beginning of summer,” said Jeff Futrell, Northampton County Veterans Director. “Many of us spend this weekend at picnics, barbecues, trips to the beach, but for those of us who have ever put on a uniform, and the family members who have supported them, Memorial Day is a special holiday. It’s the single day in which we honor the spirit of all those who’ve served our nation and who we continue to remember and honor in our hearts.”

Futrell referred to the holiday custom of raising the flag briskly to the top and then somberly lowering it to half-staff where it remains until noon, when it is raised once again to full staff.

“This half-staff position reminds us of the more than one million men and women who gave their lives in service of this country,” he said. “At noon, their memory is raised by the living who resolves not to let their sacrifice be in vain, but to rise up in their stead and continue the fight for liberty and justice for all.”

This year’s guest speaker, Larry Godwin, U.S. Army Veteran, recalled his own years of service as well as the meaning for the day.

Godwin was drafted into the Army in January 1969, the height of the Vietnam Conflict. After basic training at Fort Bragg, the Army best utilized his skills by placing him in the 77th Army Band. He was stationed at Fort Sill Oklahoma where he remained until leaving the Army in January of 1971.

Godwin referenced the Bible’s Gospel of John: “Greater love hath no man than this, that a man lay down his life for his friends.”

He listed the number of American losses in the wars throughout history, and noted the continuing loss of lives in Iraq and Afghanistan.

“We must know that these Americans not only die for a cause and for freedom, they laid down their life for a friend,” he said.

Godwin said since Memorial Day’s first observance in the late 1800s, then as Decoration Day, the federal holiday has been a day of remembrance of those who sacrificed and died in the nation’s service.

“And while it was originally dedicated to honor the Civil War soldiers, we know it today as a celebration in memory of all that have fought and defended our right to freedom,” he said. “Today it remains a time of observation to honor and respect those who fought to protect the liberties that our founding fathers proclaimed with certainty in the Declaration of Independence and thoughtfully, carefully framed it in the Constitution of the United States.”

He continued by saying, “To those that died securing peace and freedom, to those who serve in conflict to protect our land and sacrifice their own dreams to preserve the hope of our nation keeping America the land of the free for almost two and a half centuries, we owe our thanks, we owe our honor.”

Godwin said it was important not only to recognize their service, but their devotion to their fellow man and to ensure the purpose for which they fought will never be forgotten.

“From the soldiers who fought bravely during the Revolutionary War to the men and women of today’s armed services, America’s fighting forces have responded bravely to this nation’s call to duty, both on the battlefield and in their assurance of readiness,” he said. “Members of the nation’s military remain bound to their duty. For more than 200 years America’s Armed Forces have been the surest guarantee that freedom will continue to reign across this land.”

In conclusion, Godwin told those in attendance they should focus on the love these fallen soldiers have extended to each of us in giving their life for a cause and for a friend.

“We cannot, we must not forget; you may not agree with the war or the conflict or the purpose for which it’s being fought, but it is our responsibility, it is our duty to support and honor these brave men and women,” he said.

‘They will never return’

These military veterans stand and salute during the playing of “Taps” at Monday’s Memorial Day ceremony held at No Man’s... read more