Hillary Chittum, the bride’s best friend, was the maid of honor. The flower girl was Ava Baldwin, the niece of the groom.

Bill Baldwin of Pennsylvania, the groom’s brother, was the best man. Jonah Yacovissi, the groom’s son, was a junior groomsman. Blaine Edwards, cousin of the bride, was the ring bearer. The ushers were the bride’s brothers, Brian and Paul Edwards.  The piano was played by the bride’s aunt Marcia Edwards.

The reception followed the wedding ceremony at the church.

The couple honeymooned in Williamsburg, VA and will reside in Fairfax, VA. 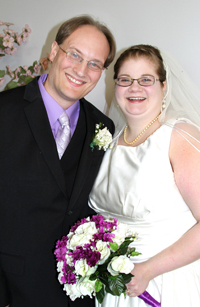