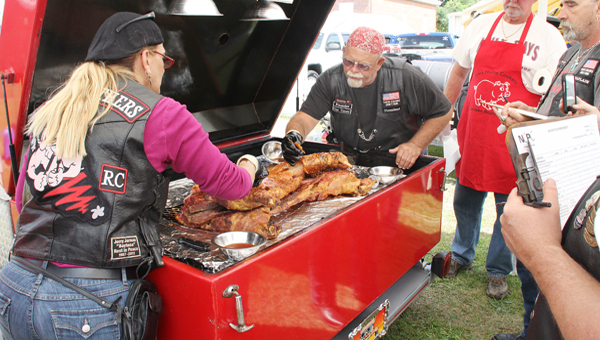 NC Pork Council judges made the rounds on Saturday, tasting and sampling each of the entries at the Roanoke-Chowan Pork Fest in Murfreesboro. Staff Photo by Cal Bryant

MURFREESBORO – Its aroma is like no other….pork, slow roasted for hours over a hot grill.

That smell not only tickles the nostrils, but pleases the palate as well.

According to Colon Ballance, Director of the Brady C. Jefcoat Museum – the entity which benefits from the annual event – Pork Fest 2012 served in excess of 600 meals.

“Everything ran very smoothly,” Ballance said. “We had a great crowd and absolutely beautiful weather. You couldn’t ask for a better day to conduct an outdoor event.”

Other than the meal those in attendance also enjoyed a variety of other activities, including tours of the museum – famous for its collection of unique items from America’s storied past – a car show, arts & crafts booths, children’s games, heaping helpings of strawberry shortcake and live music from The Double Eagle Band.

As an added treat, attendees were invited to take a stroll through Pork Alley. There, 17 cook sites were set-up where the chefs engaged in a friendly competition to win the favor of the NC Pork Council judges who made their rounds to each site, sampling the swine at every stop.

Once the pork was judged, all of it was finely chopped and doused with Murfreesboro’s top secret barbecue sauce before being served to the hungry ticket holders.

“The sauce they use definitely compliments the pork,” Ballance said. “Everyone I talked to on Saturday raved about the barbecue, saying it was the best they’ve ever had.”

While the pork and other festivities attracts the crowd, Ballance stressed that the event is successful year after year due to the volunteers that help put it on as well as the financial support of the sponsors.

“We couldn’t pull off an event as big as this without the help of our many volunteers,” Ballance said. “I also need to thank our fine sponsors – the businesses and individuals who believe in what we’re doing and help us financially to stage this festival.”

One “believer” in the R-C Pork Fest is Earl Fowler of Halifax. He has hitched his “Minutemen Cookers” grill to the back of his vehicle for 11 consecutive years and made his way to Murfreesboro to compete in the pork cooking competition.

What made this year different for Fowler is the fact that his grilled pork was judged as the winning entry.

“This is a first for me here in Murfreesboro,” said Fowler as a looked at the first place trophy perched on top of his barrel-style cooker. “I had a second place finish here before and I’ve placed first or second a couple of times in the showmanship judging, but this is the first time I’ve won the cooking contest here.”

So, what was Fowler’s strategy this time around?

“Let’s just say the pig cooperated with me,” Fowler said. “I think what won this for me was the way the skin separated from the meat when the judges flipped the hog. It just peeled right off from the front shoulder all the way to the back and was crispy, just as the judges want it.

“But just because the first place trophy wound up in my hands, that doesn’t necessarily mean I’m the best cooker out here,” Fowler continued. “There are championship cookers out here on these grounds. I haven’t met a bad one yet.”

Another key element to Fowler’s award winning effort is the style of cooker he uses.

“I purchased this cooker 12 years ago when I first started competitive cooking,” he stated. “It’s just a homemade barrel cooker. I prefer the barrel cooker over the pre-fab models. I like it because the heat rolls inside. The heat is also consistent, it doesn’t vary five degrees from one end to the other.”

“I like cooking in North Carolina because it’s true Eastern ‘Carolina style barbecue,” added Fowler who also competes in pork fests in Virginia. “I was raised on Eastern ‘Carolina barbecue, I like the taste and it’s the only type of barbecue I cook.”

Even though this is a first time win for Fowler in Murfreesboro, he said he’s enjoyed the R-C Pork Fest each year.

“I like it because of what they do with the proceeds, benefitting this wonderful museum here,” Fowler said. “I also like coming here because of the people – those that put on this event are top notch in my book. You can’t beat the hospitality here.”

Placing second in the cooking competition was Charles Chestnut and his ‘3 Little Pigs” team of Murfreesboro. Rounding out the top five, in descending order, were Charlie Meeks (“Captain Charlie Cooks”) of Newport, Jacques Turner (“Bring on the Bacon) of Colerain, and Curt Cook (“Cook Boys”) of Newsoms, VA.