WINTON – A veteran employee of Hertford County Public Schools is the subject of an internal investigation which has led to his suspension.

Walker added that Gatling, who has been employed with HCPS since February of 2000, was notified Wednesday of the pending suspension. He was not at liberty to say what prompted the suspension. However, two separate phone calls were placed on Wednesday to reporters with the Roanoke-Chowan News-Herald. Both were specific regarding allegations against Gatling, but this newspaper will not share that information unless documented through criminal charges, if any are filed. 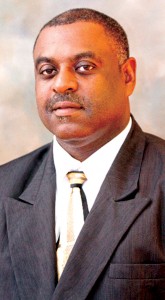 It should noted that every American, including public school employees, are presumed innocent until proven guilty.

Gatling also represents one of the two Ahoskie districts on the Hertford County Board of Commissioners and just recently won the Primary Election to move to November’s General Election.

“His suspension from the school system has no affect on his position as a county commissioner,” saidMurfreesboroattorney Chuck Revelle, who serves as legal counsel to the Hertford County Board of Commissioners. “He is an elected public official with the county; he’s a public employee with the school system, those two positions are totally different.”

Through a search of North Carolina General Statutes (115C-325), the following are the grounds for dismissal or demotion of a career employee of a public school system in this state: inadequate performance, immorality, insubordination, neglect of duty, physical or mental incapacity, habitual or excessive use of alcohol or nonmedical use of a controlled substance as defined in Article 5 of Chapter 90 of the General Statutes, conviction of a felony or a crime involving moral turpitude, advocating the overthrow of the government of the United States or of the State of North Carolina by force, violence, or other unlawful means, failure to fulfill the duties and responsibilities imposed upon teachers or school administrators by the General Statutes of this State, failure to comply with such reasonable requirements as the board may prescribe, any cause which constitutes grounds for the revocation of the career teacher’s teaching license or the career school administrator’s administrator license, a justifiable decrease in the number of positions due to district reorganization, decreased enrollment, or decreased funding, provided that there is compliance with subdivision (2), failure to maintain his or her license in a current status, failure to repay money owed to the State in accordance with the provisions of Article 60, Chapter 143 of the General Statutes, and/or providing false information or knowingly omitting a material fact on an application for employment or in response to a pre-employment inquiry.

Most suspensions are with pay to give the superintendent time to determine if enough evidence exists to justify a dismissal.

Since most school employees are paid by state funds, the state sets the rules regarding the discipline and potential discharge of these employees.

HOBBSVILLE – The owner of a general store near here shot and killed two Perquimans County brothers during an alleged... read more