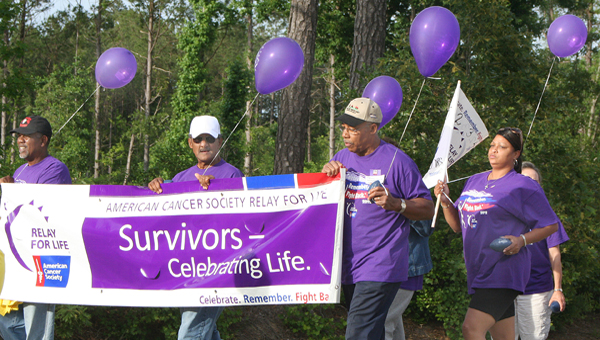 Northampton County’s inaugural Relay for Life was officially kicked-off on Friday by cancer survivors who walked the first lap of the event held in Jackson. Staff Photo by Amanda VanDerBroek

JACKSON – More than $50,000 collected to help battle cancer and it only took one county to do it.

In their first solo Relay for Life event this weekend, Northampton County exceeded their goal of $50,000. All funds will benefit the American Cancer Society (ACS) in helping with research on the disease as well as various community programs and services targeting those battling the disease.

Northampton County Relay for Life Chair Laquitta Green Cooper announced the effort had met and surpassed its goal during the closing ceremony.

“It is great pleasure and honor to stand here before you today, the citizens of Northampton County, and say we’ve reach our goal,” she said. “We exceeded our goal. As of today we have $51,788.55.”

Cooper noted the collections of donations will continue until August, when the fiscal year for Relay for Life closes out.

Kathleen Fleming, American Cancer Society community manager, worked on the inaugural event with Cooper and the committee for approximately a year and half.

Fleming said she was proud of the hard work Northampton put into its fundraising effort and thanked the participants for their support of ACS.

“This is the first Relay that I’ve had the opportunity to work with from the very beginning,” she said. “I am very honored to say that I was a part and helped you guys from the very beginning and I have just been overwhelmed with the last year and half with the community support that has just come out and the number of people on the teams. It’s just tremendous. …I think the event will get even better over the years.”

The 24-hour event boasted a large crowd Friday night as survivors, caregivers and supporters took laps around the walking track at the Northampton County Cultural and Wellness Center.

Teams sold food and raffle tickets at their booths and various entertainment was offered.

During the somber luminary ceremony (honors those that lost the battle to cancer as well as those who continue to fight) family and friends searched for the names of loved ones written on white paper bags.

The crowd also heard from cancer survivor Iris Williams who urged those in attendance to strike back at the very disease that affected her life.

“God is still in the healing business and I’d like to say to those out there: fight like a girl,” she said.

Williams was diagnosed with breast cancer on September 15, 1997. She said it was a diagnosis that made her want to give up, but the renewal of her faith in God and strength from those around her helped her through.

Despite losing her hair to chemotherapy, barely being able to walk and talk—Williams never gave up.

She recalled going to see comedian Steve Harvey with her friends, where her bald head captured the attention of a fellow audience member.
“The lady next to me said, who cut your hair?” she said. “I said, Chemo. She said, who in the world is Chemo? I said, they call it Chemotherapy.”

Williams’ fight to never give up combined with her ability to “make a joke out of anything bad” is part of what she credits to helping her through the tough times.

“If you lay down on it, it will come and get you, but if you fight like a girl, God will lift you up and He will move you on,” she said. “I haven’t been out of remission. I have been there and I intend to stay there. I say to the survivors out there tonight, you’ve got to stay there with me. We’re going to walk this walk and we’re going to continue to talk this talk. Northampton County I salute you tonight for one of the best Relay for Lifes that could ever come through here.”

During her closing ceremony remarks, Cooper thanked and recognized the 23 teams involved with the event. She noted Piney Grove Baptist Church alone raised more than $10,000. All teams will be recognized during the end of the year cookout.

Cooper also thanked the committee that helped her coordinate the event.

“They made things so easy for me,” she said. “All I had to do was ask and they were on it.”

GATESVILLE – His name is Stone, and he was rock solid. Loy Stone of Voyager Academy went 2-for-3 at the... read more