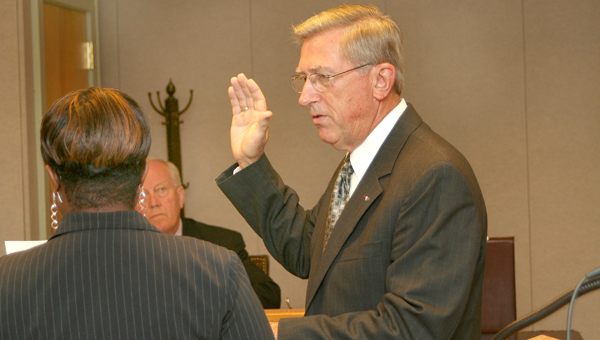 Joe Barrett received the oath of office as a new member of the Northampton County Board of Commissioners during Monday’s Board meeting. Board Clerk Kimberly Turner is shown administering the oath while County Manager Wayne Jenkins looks on in the background. Staff Photo by Amanda VanDerBroek

JACKSON – Joseph Barrett of Conway has been appointed as District One’s representative on the Northampton County Board of Commissioners.

On Monday, County Manager Wayne Jenkins presented the commissioners with a letter from Anthony Clark, chairperson of the Northampton County Democratic Party recommending Barrett as the replacement for Rev. James Hester, who resigned from his seat last month. Hester was serving as Commission Chairman at the time of his resignation.

Barrett was welcomed by the commissioners as he took his seat following his oath of office administered by Board Clerk Kimberly Turner.

“I want to thank the Democratic Party for their vote of confidence,” Barrett said later during the board comments portion of the meeting. “I’ll try to do the very best job I can.”

He also thanked his new colleagues for the welcome.

In other board news, Commission Vice Chair Virginia Spruill was selected as Chair and Commissioner Robert Carter as Vice Chair.