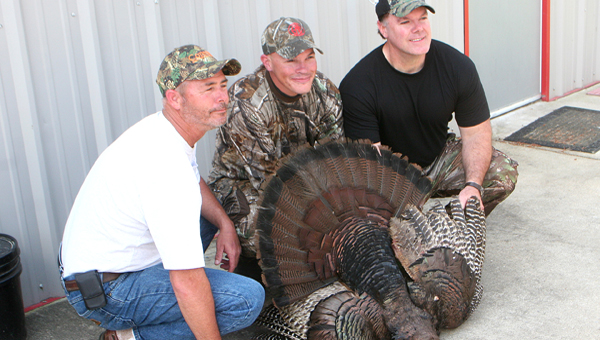 GATES – Their motto is: “The greatest casualty is being forgotten”.

On Saturday, April 21 they were left with something to remember.

The group – comprised of seven U.S. Marines from Camp Lejeune, one USAF Airman from Langley AFB, and one member of the Portsmouth (Va.) Wounded Warriors – arrived Friday evening and set up overnight camp at the Gates Fire Department.

Along the way they got a crash-course in hunting safety and some tips from some of the area’s best turkey hunters before they got chow and then had to bunk down for the night to head out at dawn after breakfast on Saturday.

“Some of them had hunted, and some of them hadn’t,” said Gates County Sheriff Ed Webb. “After their lesson the Corapeake Fire Department and the Ruritans gave out pork-chop dinners which were paid for by some citizens here in the county.”

Quite a few Gates County residents, many of whom wished to remain anonymous about their charitable contribution, pitched in with everything from landowners donating hunting land, meals that were prepared, and a shotgun contributed by Lanny Cowan of Eddie Harrell’s Auto & Sports Store.

“Breakfast was donated thru Doris and Roger’s Restaurant, the local credit union bought the eggs, and we had folks who provided cakes, brownies, fruit cups, snacks and a little bit of everything,” said Webb.

He continued to name off the community members who had contributed: “Dominion Power has been involved, MetalTech of Murfreesboro, and farmers who have donated their land.

“One man who didn’t want to be recognized brought tears to my eyes when he told me about being on a submarine and knowing what it’s like to be wounded.  He didn’t want to be known but he donated all the meals Friday night,” Webb added.

Most of the hunters were in their blinds by 6 a.m. Saturday and hunted until roughly noon.

The turkey hunt is not new to the area, but it is to Gates County.  It was started in Suffolk, VA back in 2006 as a joint venture with North Carolina and Virginia.  Rob Zepp, the original founder, worked as a turkey caller in this year’s event.

“I called Pennsylvania to ask if I could use the name ‘Wounded Warriors’ because I didn’t want the threat of a lawsuit,” Zepp said. “They told me if I was taking care of our guys from Iraq and Afghanistan who’ve been beat up, they didn’t care what we called it.

Zepp called it the Wounded Warriors Spring Turkey Hunt and hosted it for the first five years, taking it from what they called a “shoestring operation” to 16 hunters in 2011.

“We had hunted in Gates County before,” he added, “but this is their first year hosting it.”

Gates County’s hosting efforts were spearheaded by deputy Ray Freeman who began putting things together five weeks ago. A dozen county farms were used for the hunt.

“It usually takes five months to do this,” Freeman joked, “and we did it in five weeks.”

As for the results of the hunt: Lance Corporal Daniel Halek of the 2nd Battalion, 6th Marine Division and a native of Texas got a shot at a big bird, but only drew feathers. He later joked that was all that was left of ‘the one that got away’ so he stuck one of the loose feathers in his cap, proudly wearing it as a souvenir.

“I’d hunted before with my grandparents,” he said, “usually for deer.  But this was a totally new experience.  A little tiring, but a lot of fun.”

Corporal Shane Young, also of the 6th Marines, was the first Wounded Warrior to bag a turkey: a Jake of about a year-and-a-half to two years old. His bounty weighed 17 pounds, had a 9-and- three-quarter inch beard, and seven-eighths inch spurs.

The Florida native suffered a concussion in 2010 when the vehicle he was riding in hit a bomb in Helmut Province, Afghanistan and he still lives with ill effects, including post-traumatic stress disorder.

“This was a lot harder than I expected it to be but it was a very good time,” Young said of the local event. “I’d love to come back here again.

“This has just been awesome,” he added. “It’s been a great way to re-connect.”

Both Marines say they’re going to do a lot of bragging when they get back to Onslow County.

“We’re going to definitely let the other guys know what they missed out on,” said Halek.

And this was his first turkey hunt.

Ray Campbell from Eure was his caller with help from Edenton’s Mike Jones while Bubba Pauley from Sunbury did the video.

Lindsey, injured in Habbaniyah, Iraq back in 2006 when a bomb he was helping defuse went off in his face, just couldn’t get over his good fortune.

“I’m just tickled, man,” he said with a big wide grin. “He (the turkey) just kind of walked out toward the sound of the call and I just took a shot and got him.”

Following a barbecued chicken dinner at the Gates Fire Department, the Warriors and volunteers were treated to an afternoon concert from Franklin, VA native and Nashville country recording star, Colton James, who played a special song he’s recorded in honor of service personnel who put their lives on the line in the name of freedom.

As Ray Felton of MetalTech, one of the principal sponsors of the event, said as the day’s activities were ending, “It’s all about them having a good time and knowing that we appreciate their sacrifice.  It’s like they’re now a part of our family.”