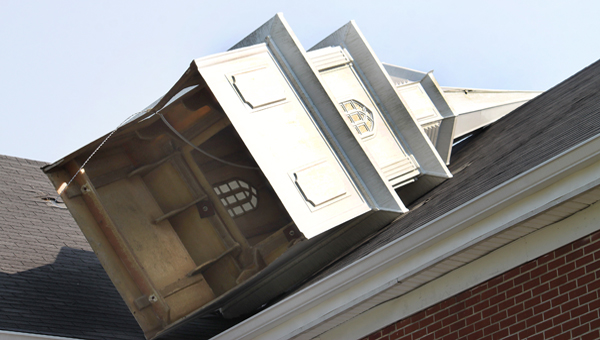 Tuesday’s high winds associated with a thunderstorm caused the steeple to fall at Jackson Baptist Church. Church officials hope to have the steeple removed from the roof on Thursday. Contributed Photo by Karen Cole

JACKSON – A severe thunderstorm that passed through here Tuesday evening left a local church without its steeple.

The fiberglass steeple of Jackson Baptist Church, located on Church Street, toppled during the storm, causing damage to the building’s roof where it landed.

Ruth Dean, who lives next door to the church, said she heard a large boom when the tower-like structure fell.

“I thought a big tree came down,” she said.

Karen Cole, another neighbor nearby, actually saw the steeple topple over. She shared photographs she took of the damage with the Roanoke-Chowan News-Herald.

Bill Little, who serves as the church’s Chair of the Board of Deacons, said the structure had not showed signs of weakness before it fell on Tuesday. He said the steeple was put up on the church in 2001.

“After the rain stopped we found leaks inside (the church),” he said.

As the steeple blew over it apparently punctured holes as it hit the roof’s surface. Little said church members worked to make some temporary repairs to the roof.

“The concern we have is getting it down as quick as we can because we’re afraid another (storm) could come along and (move the steeple) and possibly damage the roof further,” he said.

He added they hope to lift the steeple off of the roof today (Thursday) and evaluate the damage.

The company from which the steeple was purchased along with the insurance company have been contacted and will be visiting in the next few days to survey the damage as well.

Little said after meeting with the company who made the steeple they will be able to determine whether it is salvageable or if it will need to be replaced.