WINTON – Dr. Michael Donnell Perry credits his success in the field of education to his upbringing in Hertford County.

Perry, 51, will now have the opportunity to practice what he has learned over the years back on his home turf.

On Monday night the Hertford County Board of Education selected Perry as School Superintendent. He begins his new duties June 25. 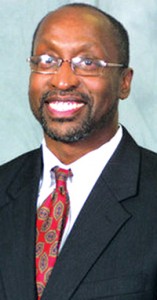 “I’m nervous, but prepared,” said Perry, currently employed by the Richmond County Public School system as its Assistant Superintendent for Curriculum and Instruction.

“I’m extremely thankful to the Hertford County School Board for this opportunity,” Perry continued. “There are many professional educators already in place there and together we’ll work hard to allow our children to compete with anyone in the world; we can and will be successful.”

With an extensive background in curriculum, Perry said he’s prepared for the new core curriculum that will soon be in place across North Carolina.

“I’ve done a lot of work with this new educational model,” he said. “We’re entering a critical period of putting this new curriculum in place and I feel I can make a difference there in Hertford County as we wade into this new core.”

A plus for Perry coming to Hertford County is he’s already familiar with the area. He was born in Bertie County (Merry Hill) to Clarine Perry, now of Winton, and the now late Jerome Perry. The family soon moved to Hertford County where he was educated in the local school system, graduating from Murfreesboro High School in 1978. There he was a star on the football field, playing linebacker and tight end for the Raiders, coached by Herman Clark.

“It’s a homecoming for me in many, many ways,” Perry said. “My third grade teacher, Annie Felton, is still there. I call her often, she’s one my heroes. Some of my early mentors were in Hertford County, they led me on the right path.”

After earning his State Teacher Certification from Philadelphia (PA) College of Bible, Perry taught school for a short time in Pennsylvania. He returned to Hertford County and taught 5th grade language arts at R.L. Vann Elementary School from 1986-1993. He then served as the Instructional Specialist for Hertford County Schools from 1993-96.

After spending one year as an Assistance Team Reviewer for the NC Dept. of Public Instruction, Perry spent the next four years (1998-2002) in Wilson, first as Assistant Principal at Fike High School and then as Principal at B.O. Barnes Elementary School.

“Dr. Norris is a man whose work and work ethic I admire very much,” Perry said. “I’ve worked with him for 15 years, first in Hertford County, then in Rocky Mount and now in Richmond County. He helped prepare me to get to this stage of my career.”

Perry, who holds both a Masters in Elementary Education degree and an Ed.D. (Doctorate) from East Carolina University, was one of 16 candidates to apply for the Hertford County job. Of that total, five were interviewed by the local school board.

“Of the ones we interviewed, all had great potential to become our new Superintendent,” said David Shields, chairman of the Hertford County Board of Education. “Dr. Perry stood out because of his work experience. He’s held many different positions in education and worked his way through the ranks. I feel that’s the best way to prepare to lead a school district.

“What impressed us the most was his knowledge of curriculum programs, federal programs and budgeting,” Shields added. “I spoke to Dr. Norris and he told me he hated to lose him, but that Dr. Perry was ready to lead.”

While Shields admitted that Perry or any of the other four finalists would have been right for the job, what tipped the scales for him was Perry’s knowledge of the local area and his work experience.

“He has been an assistant superintendent longer than the other leading candidates,” Shields said. “We know him; he doesn’t have to jump that hurdle. He knows a lot of people here locally. That swayed my vote.”

Perry and his wife, Beryl, are the parents of three children – Stephanie and Michael, both graduates of UNC-Chapel Hill, and Leah, a rising senior at UNC-CH.