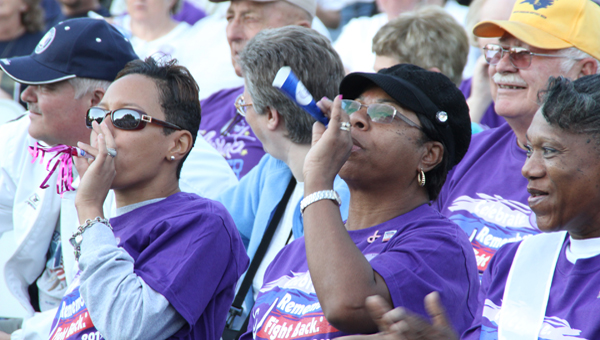 Cancer survivors “toot their own horn” during opening ceremonies of the 2012 Hertford-Gates Relay for Life, held April 27-28 at Chowan University. Staff Photo by Amanda VanDerBroek

MURFREESBORO – It’s a family no one wants to be a part of, but each year they come together to laugh, smile, remember, raise money and, most importantly, fight back. This past weekend cancer survivors, caregivers, loved ones, friends and neighbors gathered at Chowan University’s Squirrel Park for the 12th annual Hertford-Gates Relay for Life.

“It gets better and better every year,” said Rochelle Harrell, who co-chaired the event along Leigh Nowell.

The funds go to support programs and services offered through the American Cancer Society, including “Road to Recovery”, which assists cancer patients in getting to their treatments, and “Look Good…Feel Better”, which gives skin, makeup and hair/wig techniques to those battling the disease. Each program is headed by a local volunteer.

Harrell said she was happy with the turnout for the event and especially pleased with the fundraising effort. She noted Relay’s first-ever “womenless” beauty pageant held during the weekend’s effort earned $1,400 in 45 minutes.

“It’s been a pleasure to work with the teams and volunteers to raise money,” she said. “It’s amazing that Hertford and Gates counties can raise $205,000 in less than 12 months.”

During the opening ceremony on Friday, the crowd heard from Susan Casper, a cancer survivor, and Christina Cooper, a caregiver.

Casper, who was diagnosed with ovarian cancer in July of last year, described herself as a “new member of this family.”

“Fellow survivor Ray Felton called me (last) summer, when I was diagnosed, and welcomed me to the family, that of cancer patients,” she said. “He told me that day that it’s a family that no one willingly joins, but it would be a tightly woven group that would support me from the day of my diagnosis onward. …So in my mind Relay for Life is a family reunion. Welcome brothers and sisters and extended family to our family reunion.”

Casper shared with the audience some of the worst moments in her life, including the loss of her mother in 1997, the health obstacles her son, Brendan, had to overcome soon after his birth in 2004 and the most recent, her diagnosis on July 13, 2011.

“When you get that kind of news you realize you are not in control,” she said after recalling each of the stories.

Casper recalled the day when her oncologist, Dr. Diane Semer, told her the news.

“Neither Danny (my husband) or I, to this day, can tell you anything else she said because in our minds I was already dead,” she said. “I had stage three ovarian cancer; the silent killer. And I didn’t know anyone who had survived that.”

“I celebrated Veteran’s Day by watching the last drop of Chemo, also known in our house as ‘Round Up,’ drip from the bag into my IV,” she said. “I do not want to take away from the men and women of our Armed Forces who fought to protect our democratic freedoms, but I am a veteran of a different war—the one for my life.”

She continued by saying, “And cancer is a cruel, vicious enemy. I knew that with certainty the first time I tried to eat an Oreo cookie after a round of Chemo and it tasted awful. When you mess with a woman’s chocolate you are pure evil.”

Casper said her cancer journey has confirmed a life lesson for her.

“Bad things happen to us on Earth and we can’t stop that,” she said. “However, we do control our response to those circumstances. …I had no choice, but to approach my fight with joy and laughter and jokes because otherwise cancer will toss you into a pit quicker than Joseph’s brothers.”

At the beginning of Casper’s fight, Dr. Semer told her not to look at the statistics on the Internet because those numbers look at a group not individuals. To this day, Casper admits she still doesn’t know those statistics.

Casper said when she was diagnosed she lost the blessing of not having to think of her health constantly.

During her journey, Casper has realized through the loss of one blessing another has been gained.

“The unexpected blessing I received is learning what cancer can do,” she said. “Cancer can motivate people to express unconditional love and support because they understand that a patient’s positive attitude and faith are keys to defeating cancer. Please continue to seek ways to let a cancer patient or someone who has battled cancer, and still might be afraid, know that you are thinking of them.”

Casper encouraged the audience to use all ways (from the Internet to cards and personal visits) to reach out to those battling cancer.

She said cancer can prompt people to talk about their disease, which encourages others to pay attention to their own bodies. Casper urged the crowd to take control of their health.

“No one knows your body like you do. Pay attention to what it’s telling you,” she said. “Know cancer symptoms, do research, don’t be timid about scheduling your doctor’s visits and getting those wellness screenings and if something doesn’t feel right you keep at that doctor until you know they’re doing everything they can. We are a medically advanced society. Use the tools we have to protect yourself.”

Casper said cancer can inspire people to “shout from the rooftops” that the disease needs to be stopped. She encouraged those in attendance to contact their government leaders and to visit the Advocacy tent at the event.

“Finally, cancer can bring a crowd as large as this one to Chowan University to fight back against a disease that will affect 1,638,910 new patients in 2012, according to the American Cancer Society,” she said.

Casper spoke about the work of ACS and the programs available to cancer patients during their fight.

“Our work at Relay has saved more lives,” she said.  “I could read you a whole list of cancers we are defeating by just getting out here and having a good time at the family reunion.”

She urged the crowd to continue the fight against cancer through the support of Relay.

Cooper spoke about her role as a caregiver to her mother, who lost her battle to breast cancer in December.

She said the role of caregiver is an obviously a difficult one, but rewarding at the same time, caring for your loved one as they fight.

“As bad as being a caregiver is, I wish I could be a caregiver right now more than anything in this world,” she said.

Cooper gave up her career as a nurse to stay at home with her mother.

Cooper said during that time she and her mother had some of the best moments, ones filled with different conversation and laughter.

“My mom didn’t want anyone to feel sorry for her, this was her battle, this was her fight, and this is one of the characteristics I admired in my mom the most—my mom was a fighter with no regrets,” she said. “Being the caregiver of my mom and seeing how hard she was fighting for me, wanting me to be the best caregiver for her. She deserved nothing but the best care and it was my mission to give it to her.”

To make a donation or for more information about Hertford-Gates Relay for Life visit www.relayforlife.org/hertfordgatesnc or email hgrelayforlife@live.com.