Jim Madson was chosen by the Hertford County Board of Health to take over as Director of the agency, according to board chairman Howard J. Hunter III. 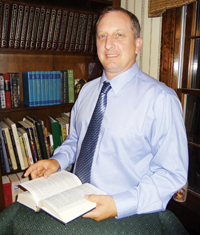 James Madson has assumed the role of Director of the Hertford County Public Health Authority.

“We are excited to have such a qualified candidate who is familiar with our region assume leadership of the Hertford County Public Health Authority,” Hunter said. “Jim will be supported by a strong management team and a community-minded Board of Health.”

Madson hails from Hinesville, Georgia and has 17 years of public health experience as a practitioner, instructor and program administrator. He has also served a Director of Public Health in Italy, California and Honduras.

“I believe strongly in partnerships and cooperation among organizations,” he continued. “I feel that the community becomes a better place in which to live and work when everyone is working towards common goals. I believe in loyalty to those that are in my life and the importance of treating others the way you want to be treated.”

Madson replaces Curtis Dickson who retired in October of 2008.

Hunter said the board of health had been actively seeking a quality candidate since 2009 and had brought in a few for interviews. He said most of the candidates withdrew because they were concerned about North Carolina Senate Bill 433 which allows the county to consolidate health services and the department of social services.

“We did not and do not have any intention of moving in that direction,” Hunter said. “It is not something that is on the table in Hertford County.”

While it concerned Madson as well, the new director took the county’s word they were not looking to consolidate.

With Madson taking over responsibilities as health director, the co-interim directors will each return to their normal duties. Romona Bowser will return to being fulltime Chief Financial Officer and Diane McLawhorn will continue as fulltime Director of Nursing.

“We appreciate the work Romona and Diane have done over the last four years,” Hunter said. “I cannot say enough about their contributions and how far the health department has come under their leadership.”

The Hertford County Public Health Authority will hold a reception for Madson in May.

This is a rough draft of the proposed site layout of the new Hertford County Courthouse to be constructed on... read more