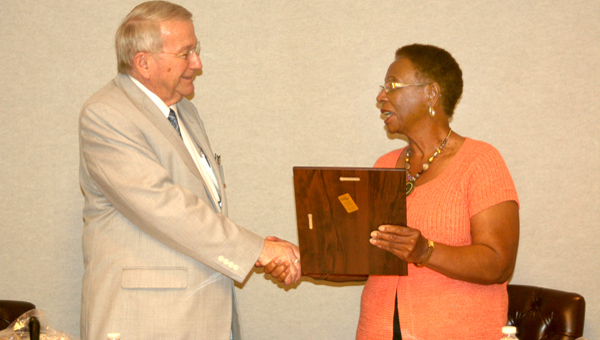 “Due to the fact you’re leaving us and this is your last day with us, we wanted to give you a token of our appreciation for being on the board,” she said. “You have been an asset to us, not only to the board, but to the citizens of Northampton County.”

“It’s been a pleasure and I’ll think about you when I’m out on the road going to some place of entertainment with my wife, and especially on Mondays (meeting days),” Hester responded. “This is so kind of you and I’ll treasure it.”

During public comment, Clarence Drumgoole said Hester’s presence on the board would be greatly missed.

“I wanted to thank you for your service,” he said. “You’re going to be greatly missed because in any setting you’re going to need someone there to sort of keep the calm. And I see that in you.”

Hester, who has served nearly two terms on the board, announced his resignation April 2 and it will become effective at the end of the month. Hester confirmed in February that he was not seeking a third term. His current term was due to expire the first Monday in December.

Meanwhile, the commissioners are waiting to hear back from the executive committee of the Democratic Party on Hester’s replacement. The committee is expected to meet this week to give a name of a representative for District 1.

County Manager Wayne Jenkins suggested the board call a special meeting when the committee has decided on a recommended replacement.