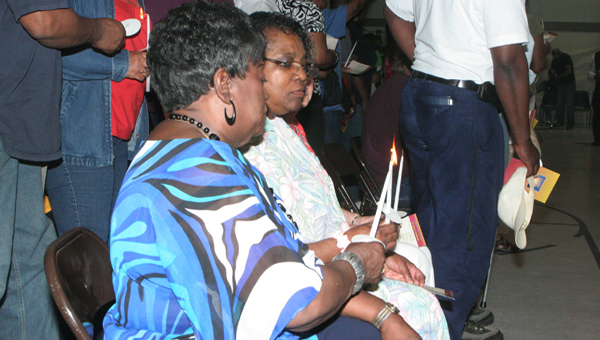 Those in attendance during Monday’s “After the Storm: A Day of Remembrance” lit candles from person to person to remember April 16. Staff Photo by Thadd White

COLERAIN – Then came the morning.

Or at least the one-year anniversary of a day that remains locked forever in the minds of the people of Bertie County and so many others throughout North Carolina.

April 16 remains as a constant reminder of the death and devastation suffered by the people of Colerain and Askewville and all places in between during the tornadoes of 2011.

Monday, hundreds gathered at Colerain Elementary School to remember and to rejoice.

“You cannot celebrate the joy that comes in the morning, unless you make it through the weeping,” the Rev. Vonner Horton, Pastor of Oxley Hill Missionary Baptist Church, told the audience. “The question is 366 days later, are we a better people? We have talked about unity. Do we still have it?

“Those 12 lives that were lost don’t have to be lost for naught,” she continued. “We have a God-given responsibility to love our neighbor.”

Turning her attention to those who had been through the tough times again, Horton told the audience to remember they were there for a reason.

The entire evening centered dually around the loss of 12 people in the storm and the fact the county has moved towards recovery.

As the ceremony, which was entitled “After the Storm: A Day of Remembrance,” started, Bertie County Commission Chairman L.C. Hoggard III welcomed those in attendance.

“This is a time when we will remember, but it is also a time to celebrate because despite all that happened we are still here,” he said. “This day was picked to be celebrated and to remember what happened a year ago.”

Hoggard also asked those in attendance to continue to remember those who suffered in the storm.

“We ask that you continue to pray for the victims because healing takes time,” he said.

“Thank you for being so good and so kind to us,” he prayed. “You have been better to us than we’ve been to ourselves. We say thank you God because in the midst of the storm, you were right there.”

Bertie County Commission Vice Chairman J. Wallace Perry thanked the emergency volunteers who responded immediately to help those in need following the tornadoes touching down in the county.

“April 16, 2011 is a day most of us will never forget,” Perry said. “I know I won’t. It was a day of devastation and a day we learned so much about our front-line volunteers. They showed Bertie County what they’re worth to us.

“I’ve never seen anything to beat the volunteerism,” he continued. “I’m glad to live in a county that helps each other like that.”

The Rev. R.O. Denton Jr., Pastor of Askewville Assembly of God, offered words from the Bible, reading from Psalm 46.

“God is our refuge and strength, a very present help in trouble,” Denton read.

The Rev. Mary Drake, Pastor of First Baptist Church of Colerain, said a prayer for the victims, their families and the community.

“One year ago today, God, lives were lost and devastation hit our community,” Drake said. “Over the past year we have seen your grace and mercy. We’ve seen the love of God in action.”

Interim Bertie County Manager Morris Rascoe recognized those who served as volunteers during the cleanup.

Following those recognitions, local dignitaries were invited to the platform to remember the storm. Representatives from the offices of U.S. Senators Richard Burr and Kay Hagan were on hand as well as someone representing Governor Bev Perdue and Congressman G.K. Butterfield.

State Representative Annie Mobley was there as well and remembered riding around on the county looking at the devastation. She also complimented the people of the county and the county’s leaders for their work in the days immediately after the storm.

Bertie County Sheriff John Holley remembered the events of April 16, 2011. He said he would never forget what was done that night and that his office was still available to help anyone who needed it.

Bertie County Schools Superintendent Dr. Debbie Harris-Rollins recalled the memory of losing her father and how it related.

“Not one day has passed since my father died 15 years ago that I haven’t thought about him,” she said.

She then reminded those in attendance that though a year has passed and time has moved on, they don’t have to “get over it.” Dr. Harris-Rollins did, however, tell those in the audience to remember they were still here for a reason.

Horton led the lighting of the candles in memory of those who lost their lives and the other devastation that struck the county.

One-Stop voting for the May 8 Primary begins Thursday, April 19. Those wishing to vote may begin doing so at... read more