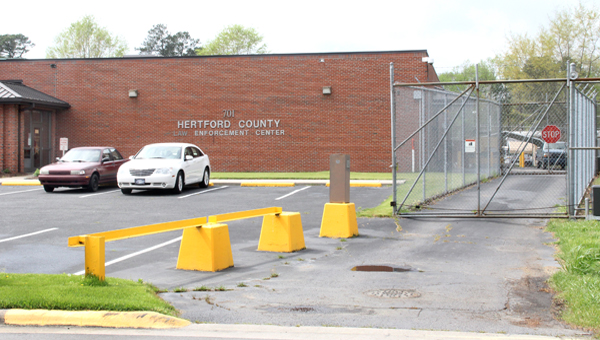 GATESVILLE – An agreement between neighboring counties will allow one to save a little money while the other can add to their cash flow.

Those running afoul of the law in Gates County and need to be incarcerated will find themselves behind bars in Hertford County effective July 1.

Over the past several decades, the Gates County Sheriff’s Office has used the Chowan County Jail in Edenton to house its prisoners. However, due to a decision by Chowan County officials to close its jail and join the Albemarle District Jail (ADJ) in Elizabeth City, that left Gates County Sheriff Ed Webb looking for a new home to house his prisoners.

Gates County Manager Toby Chappell said he and Webb explored the possibility of joining the ADJ, but the associated costs far exceeded what Gates County traditionally budgeted for that service.

“It was a staggering increase over the $250,000 we currently budget on an annual basis to house our inmates,” Chappell said. “It would take an increase of multiple cents on our tax rate just to cover those costs. We had no other choice than to look at other options and it was a no brainer on our part to look at our neighbor over in Hertford County.”

“We had a very productive meeting,” Chappell said. “We reached a tentative agreement to have Hertford County house our inmates beginning July 1.”

Chappell said that transition would start in June.

“It will take about a month to change over,” he said.

Chappell said the Hertford County Jail will guarantee 15 spots per day for Gates County inmates at a fee of $50 per male and $55 per female, which includes all meals. Gates County will be responsible to cover any medical costs should that need arise.

“On average over the past year we’ve held seven males per day and about one female a day,” Chappell said. “Right now we’re paying Chowan County a flat fee of $55 per inmate, both male and female, so we’ll be saving $5 per male, per day by moving them to Hertford County.”

The capacity at the Hertford County Jail is 92 inmates. Sheriff Vaughan said his jail is no where near capacity, normally housing approximately 60 inmates per day.

The move from Edenton to Winton will also save the Gates County Sheriff’s Office in transportation costs, which is budgeted separately from the inmate housing fees. No matter where an arrest is made in Gates County, that person has to first be transported to Gatesville to appear before a magistrate before being taken to jail. It’s a 31-mile trip, one way, from Gatesville to Edenton. That trip will be cut by more than 50 percent from Gatesville to Winton, which is 14 miles one-way.

“We’ll be saving money on two fronts – the housing fee and the transportation costs will be lower by housing our inmates in Winton,” Chappell said. “It also generates some revenue for Hertford County.”

Chappell called the agreement a “win-win” for both counties.

“This is another example of counties in northeastern North Carolina working together to find solutions to problems,” he said. “Sheriff Vaughan had open beds in his jail and Sheriff Webb has inmates needing to be housed. We’ll wind up paying less to Hertford County than to Chowan County. It’s a good thing for both Gates and Hertford counties and the taxpayers of both counties.”

By Lance Martin www.rrspin.com SEABOARD – A woman and child died in a two-vehicle crash on Highway 186 outside Seaboard... read more