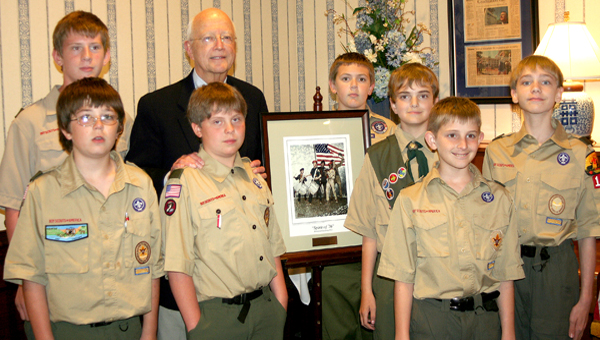 MURFREESBORO—A long time area physician was recently honored here for his commitment and service to the community.

Last Tuesday, Dr. Charles Sawyer was honored at the 2012  Hertford County Friends of Scouting Distinguished Citizen’s Dinner held in the Chowan Room at Chowan University. The event recognized the work of Sawyer as well as the work of Boy Scout troops in the Tri-County District made up of Hertford, Northampton and Halifax counties.

Sawyer was presented a Norman Rockwell print as a token of appreciation and said he was surprised by the recognition and was “very grateful.”

“I’m just humbled by everyone for being here for this occasion,” Sawyer said. “I want to thank the Hertford County Boy Scouts for this prestigious award. The Hertford County Distinguished Citizen’s Award is well above my expectations and I will always cherish this honor.”

Sawyer reflected on his own participation in scouting which began at age eight in Cub Scouts.

“I was in the first den ever was established in Windsor, and it started a very vigorous life in scouting for me,” he said.

After Cub Scouts he went on to Boy Scouts where he earned Tenderfoot up to Star.

Sawyer said he was very involved in scouting until two problems occurred.

“First, I found out about athletics and I was very involved in football, basketball and it just took time away from scouting,” he said. “But second, and the main problem, I found out about girls. That, unfortunately, took my aspirations for the Eagle Scout and it just flew away, which I’ve always regretted.”

Despite giving up scouting for other ventures, Sawyer said his two grandsons have done all their requirements and both will soon achieve that Eagle Scout rank.

“That accomplishment by my grandchildren has made me very, very, very proud and it just demonstrates what my family has felt all these years about scouting,” he said.

Sawyer concluded that he would be “forever grateful” to everyone in the room, and in particular the scouts, for the honor.

Before Sawyer was honored, William “Bubba” Peele and Frank Rose shared their thoughts and memories about the doctor.

“He has a unique capacity of embracing all things in the universe that are important to him and taking them another step—his family, his friends, his medical practice, his humanitarian efforts, his church and his home area,” Peele said. “Always he loves unconditionally and gives unselfishly of his time and his resources.”

Rose said that though at times he and Sawyer disagree on some things (mostly sports related) one thing they always agree on is the value of scouting to the community and to the young men involved.

“Charles is dedicated to God, to his church, to his family, to his country and he demonstrates this dedication by helping others through his medical profession and through community projects,” Rose said. “His quiet support of scouting and his leadership by example has not gone unnoticed.”

McCrae Ashley of Boy Scout Troop 129, Ahoskie, spoke about his experiences and adventures in scouting.

“Scouting means a lot to me,” he said. “Yes, it is a lot of work, but that’s okay because along the journey we learn who we are.”

Don Joyner, who served as master of ceremonies, spoke about the accomplishments by Boy Scouts throughout the Tri-County District and in Hertford County.

“I would like to personally thank all of our Scout leaders for their hard work and dedication towards the growth and development of our youth, without which, scouting in Hertford County would simply not exist,” he said.

Among the activities local scouts have participated in include the District Pinewood Derby, Gold Rush at Medoc Mountain State Park, Ahoskie Cub Campout and Chowan University Merit Badge College. The scouts have also supported several community service projects, including an annual Scouting for Food Drive, in which they collected more than two tons of food in the Tri-County District last month in an effort to replenish local food banks after the holidays.