As always, student-athletes at Chowan are staying busy.  The school year is starting to wind down, but there are still a lot of games and matches for the Hawks to play. 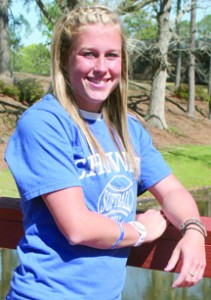 Both men’s and women’s tennis team picked up wins earlier this week against University of Maryland Eastern Shore.

On Thursday, the Hawks fell to Norfolk State University.  Thursday was also Senior Day for Adam Moneypenny, Bjorn Blythe, and Jena’y Nelson.  Congratulations on your careers!

The CIAA released Baseball and Softball weekly honors this week.  Senior Brett Garrett was named CIAA Pitcher of the Week after pitching a three hit win over Saint Andrews back on February 18.

Coach Taylor Furlough was named CIAA Coach of the Week from that same week.  Congratulations!

Baseball heads to Elizabeth City State this weekend to take on the Vikings.

After going 6-12 during the week (4-6 in a doubleheader vs. Virginia State), Amber Matthews was named CIAA Offensive Player of the Week.  Freshman standout Alora Lincoln earned CIAA Pitcher of the Week honors after throwing a seven inning shut-out against VSU, and retiring nine straight batters in a relief outing against Millersville.  Coach Balduf was named Coach of the Week from that same week.  Congratulations.

The CU Soccer teams are not in season, but they are staying active in the community.  They are working with the Town of Murfreesboro to host the 3rd Annual Spring Soccer League.  The league is geared towards ages 3-13, and you can register at Town Hall.  Hurry because practice starts March 27!

The Football team has started spring practice.  With 16 juniors that will be seniors in the fall, there is a lot of leadership on the team!  The team will be showcasing their progress in a Blue-White Scrimmage on April 20 at 8 p.m. at Garrison Stadium.  Come show your support!