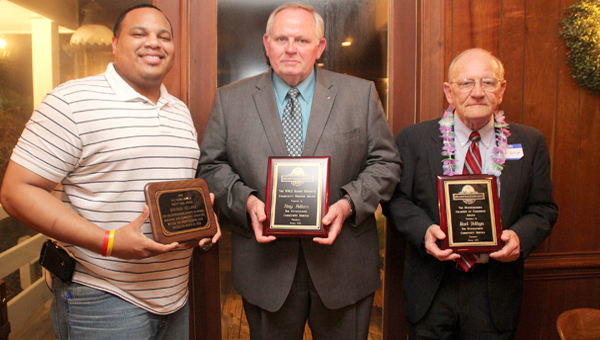 However, White was quick to note that Chowan isn’t alone in its recent round of accomplishments….Murfreesboro and surrounding communities are growing in their own right and are linked to the university’s success.

Serving as the featured speaker at the 60th annual Murfreesboro Chamber of Commerce banquet, White recalled the first time he spoke to the Chamber upon his arrival in Murfreesboro.

“I talked about what we hoped to do; what we dreamed of doing; how the university and the town could be transformed. Vision and hope back then is now reality,” White said.

He continued, “There’s one constant when you talk about Chowan University, the town of Murfreesboro and surrounding communities and that is we are linked together. We cannot be separated; the health of one directly affects the other. We either sink together or we climb together.”

White praised the local community for their commitment to work hand-in-hand with the university.

“Chowan University almost died seven or eight years ago and that wasn’t a lot of fun,” White recalled. “I saw something back then I had never seen before….I saw people walking with their rears on the floor. But we had commitment, we had determination and now Chowan University is flying higher than ever before in its 160-plus year history.”

White said the university’s enrollment has now doubled in size over the past seven to eight years, making Chowan the fastest growing private school in the state. He added that the university is now a 40 million dollar per year operation.

“What does that money do for the local community, it turns over several times and that’s good for local business,” White observed.

Chowan has also grown as an employer – now with over 180 individuals on staff. Additionally, the university is investing in itself, most notably with a recent round of renovations to the tune of $15 to $20 million.

“And we’ve done this by keeping our debt very low, between three to four million,” he said.

White was excited about another element of growth at the university – the addition of its Graduate School program, which will see its first round of graduates this May.

Athletics is another area of growth at Chowan. White said that while the sports programs have not quite reached their full potential in wins and losses, he was pleased with the pace towards overall improvement.

He cited the new housing now under construction for students – the first move in that residential direction on campus in over 40 years.

“When we win, we all win,” White continued. “Between then and now Chowan has dramatically improved.”

But that improvement is not just limited to Chowan University, White said.

“The town has also made substantial improvements,” he noted. “One of the biggest differences I see from then ‘til now is the amount of traffic, we occasionally have a traffic jam in downtown Murfreesboro….and that’s a good thing.”

White recalled his very first visit to Murfreesboro prior to accepting the university’s offer to become its next president.

“Downtown back then wasn’t so swift,” he said. “It’s much, much better now. You’ve done a lot of improvements there and the university appreciates that,” he said.

He also praised the continuing efforts of the Murfreesboro Historical Association to preserve the town’s rich heritage.

“We also have something we haven’t experienced before – a housing shortage….that’s a sure sign the town is growing,” White noted.

“The town and the university are prospering,” he said. “We all feel better about ourselves.”

He promised that Chowan University will continue to grow, which will force growth within the town.

“We cannot thrive at the university without some growth each year, that’s just the way it works,” White said. “We intend to grow. More students means more money circulating in town which equals business growth.”

With that growth, however, comes needs, White said. He listed five much needed items that will help both the university and the town grow – a motel, more manufacturing jobs, an increase in marketing, continue to improve downtown, and better highways.

“What do we really want for the future of this community and surrounding communities,” he asked. “Do we really want prosperity? Before you answer that you need to know that prosperity comes with a cost. More students at the university means more mess that college students get in to. It means more traffic. Prosperity could upset our tranquil way of life. So let’s be careful of what we wish for as we might get it.”

White closed by saying, “I would challenge you to look to the future and see what you see. I think that if you look prayerfully, you just might catch of glimpse of what this community can become. Share that vision with the rest of us and together let us move forward towards whatever that future holds. Much progress has already been made, much more than some of you thought could happen, but that is just a prelude of what’s to come.”

Barker said Chamber sponsored events – such as the annual Easter Egg Hunt (upcoming on April 6), the Taste of Murfreesboro (May 20), Watermelon Festival Parade (Aug. 4), Beef It Up (in the fall), the Christmas Parade and town Tree Lighting ceremony – as well as the normal ribbon cutting ceremonies for new or improved businesses, Business After Hours events and workshops, the organization is very busy year-round.

“It’s our job to promote your business to the public and help bring the public to your door,” Barker stressed.

Murfreesboro Mayor John Hinton was included on the evening’s program to bid welcome from the town as well as to recognize three of the town’s oldest businesses.

“It’s an honor for me to represent the town of Murfreesboro, the oasis on the Meherrin, a bastion for enlightment and cultural diversity,” Hinton said.

He then saluted the trio of long-established businesses in the town – Revelle & Lee (a law firm started in 1936 by J. Craig Revelle), Walter’s Grill (a local and North Carolina tradition, famous for its hot dogs, since 1944) and Ruffin Brothers Grocery & Furniture Store (opened in 1946 by Jacob Ruffin Sr. and his wife Lulu). The Chamber presented certificates to representatives of each of those businesses.

Monica Yungeberg, Pastor of Murfreesboro Methodist Church, gave the invocation prior to the meal.

As is tradition at Murfreesboro’s Chamber banquet, three awards were presented to local individuals who each made a significant contribution to the town’s growth over the past year and for their community spirit. Ray Felton, owner of Metal Tech, was presented the Sammy Doughtie Community Service Award on behalf of Murfreesboro radio station WDLZ-FM. Murfreesboro Town Administrator Brandon Holland received the Front Page Award from the Roanoke-Chowan News-Herald. Earl Telliga, General Manager of WDLZ-FM, was honored with the Chamber of Commerce Award.