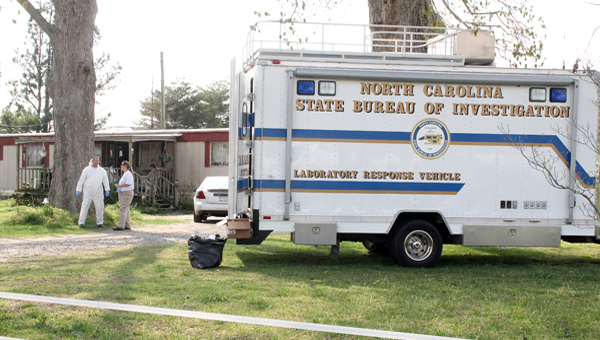 The North Carolina SBI’s Laboratory Response Vehicle is seen parked in the front yard of a Gates County residence where a meth lab operation was discovered on Wednesday. A husband and wife were arrested and a third person is being sought. Staff Photo by Cal Bryant

The arrests came Wednesday following an investigation by local and state authorities that began in December.

Daniel Dillon Jr. and his wife, Veronica Dillon, of 718 Rooks Road were charged with the manufacturing of meth, possession of meth with the intent to sale and distribute, and felonious possession of firearms. The amount of their bond was not made available by News-Herald press time on Wednesday night.

Another individual, a female, was detained at the scene for questioning. Webb said that individual was allegedly a meth user.

A search warrant was served on the occupants of the residence by the GCSO and North Carolina State Bureau of Investigation. Webb said approximately 40 local and state law enforcement officers were involved in Wednesday’s raid on the home.

“We’ve been working on this particular location since right around Christmas,” Webb said.

The SBI’s Special Response Tactical Team along with Webb and his deputies converged on the home at around 9:30 a.m. Due to the toxic nature of meth, those initially entering the home were completely covered in haz-mat type clothing along with bulletproof vests.

“We were able to secure the residence and the suspects in a quick and efficient manner,” Webb said.

Webb said that the husband and wife were cooperating with his officers and the SBI. He added that all the pre cursors associated with meth manufacturing were discovered in the home as well as a small amount of crystal meth – a rock-like drug (similar to crack cocaine) that is smoked in order to achieve a “high.”

“All the things normally found in a meth cook operation were found here,” Webb said. “There were not in the process of cooking meth upon our arrival, but they had been.”

Webb added that the high level of toxic chemicals found in the home will make it unlivable for a while.

“We’ve already contacted the landlord that was renting the home to the couple and explained to them that the entire inside of the residence will have to be thoroughly cleaned before allowing it to be rented again,” Webb said.

“It was so bad inside that the (search) dogs used here this morning had to be decontaminated after they exited the home,” Webb added.

SBI Laboratory Response agents working to collect evidence inside the home were also dressed in haz-mat gear and used respirators upon entering the residence.

Several weapons were also seen being removed from the home.

“It’s been a long time working this case, a lot of man hours were put in, but the end result is worth it,” Webb said.

He added that information provided by local citizens first led his officers to launch an investigation.

“We always appreciate the help provided by our citizens and encourage them to continue to supply us with information that will help us remove this element from our county,” Webb said.

Meth labs also pose a physical danger in the form of explosions.

“These types of labs are extremely volatile,” Webb said. “There are several cases of where meth labs blew up. There are some extreme cases where the toxic gases that are a by product of a meth cook are so dangerous that just inhaling them can cause severe lung damage or even kill a person.”

As a safety precaution Wednesday morning, Webb said other law enforcement officers not directly involved in the raid on the home stopped at nearby homes to warn those residents of what was occurring.

“We secured the entire neighborhood; we told those residents to remain inside their homes until we gave the all-clear signal,” Webb said.

Cheryl McNeill, Special Agent in Charge of the SBI’s office in Greenville, said her unit is called to assist local law enforcement officers any time a meth lab is discovered or there is evidence one is in operation.

“Our agents removed everything within this residence that is possibly associated with a meth lab,” McNeill said. “Also, any people that are in a meth lab or have the pre cursors that may lead up to a meth lab are also decontaminated.

“Because it’s highly toxic, we want to make sure that the groundwater and air quality have not been compromised by the operation of a meth lab,” she added. “It’s our job to assist the county’s Sheriff’s Office in any way we can to help ensure the safety of the citizens.”

MERRY HILL – It was the set up for a showdown. After upping their record in league play to a... read more