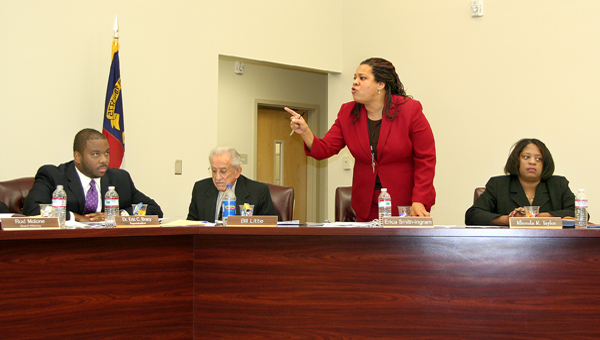 Northampton County Board of Education member Erica Smith-Ingram (standing) expresses her displeasure concerning a majority decision by her colleagues to move forward with the merger of the county’s two public high schools. Staff Photo by Amanda VanDerBroek

JACKSON – Despite last minute pleas from the public and a dramatic objection from one board member, the Northampton County Board of Education’s decision made in December to merge the county’s two high schools still stands.

“Mr. Chairman, after considering four independent studies regarding consolidation done by MBAJ Architects, SFLA Architects, Roger Fowler and Johnny Clark from the Department of Public Instruction and after receiving comments from the public during the hearings held at the Northampton County Cultural and Wellness Center on January 19, Northampton County High School-West on February 24, 2011 and Northampton County High School-East on February 17, 2011, I move that the board ratify its previous decision to consolidate the two high schools into a single high school to be located in the Creeksville precinct,” said board member Bill Little as he motioned to approve the measure.

Vice Chair Marjorie Edwards offered a second and the motion passed with Erica Smith-Ingram voicing the only objection.

The board also decided upon the name of the high school (Northampton County High School), its colors (navy blue, white and teal) and mascot (the Jaguars) as well. The administration noted a group of students were involved with a committee created to come up with the name, colors and mascot for the school.

The vote to ratify the original decision did not come without comments from opponents of the merger, most parents and community members from the western end of the county, and most notably from Ingram, who got emotional as she stood in “protest” against the vote.

Ingram said none of the independent studies recommended locating the merged high school at East.

“MBAJ’s recommendation was that we maintain Pre-K through 12 grade on each end of the county,” she said. “SFLA did a report, but theirs was toward a centrally located high school, where the county commissioners said they wouldn’t put it before the voters for referendum. The representatives from DPI in the report we were given that East could not handle an additional load of students, therefore, two years ago when we voted to move seventh and eighth graders to Northampton West that we did not do the same to Northampton East, because East could not hold an additional load of students.”

Ingram said work had been done to East, but it still was not up to par and would never be, even after renovation.

She also addressed the travel concerns, mentioned repeatedly by the public.

“It is appalling that my fellow board members would put anybody’s child on a bus for an hour and 45 (minutes) to two hours and expect them to be in a condition to be able to learn,” said Ingram while voicing her opposition to her colleagues. “I’m just going to take a stand and I will stand up for the rest of the meeting.”

Ingram rose from her chair and stood for the remainder of the meeting off to the side. Ingram said she would be silent in her protest so the board would not sanction her.

Several audience members also showed their opposition by standing up as well.

“We want to spend $7 million on a 50 year old building. That is ridiculous. That is unfair and you are killing the future of Northampton County,” Ingram said.

After Ingram’s outburst, which incited angry remarks from the crowd, Chair Donald Johnson called for order in the meeting.

Also related to the school merger, the board agreed to the purchase of 80 new high school band uniforms from Fruhauf Uniforms, Inc. for the total cost of $33,009.92. A $98,209 painting contract with ARMEN Construction for the merged high school was also approved.

Tension was high from the beginning of the meeting as parents, citizens and interested parties lined the walls of the board room.

Before the approval of the board agenda, Schools Superintendent Dr. Eric Bracy requested additional items be placed before the board for their decision if the high school merger moved forward.

“As the board is aware, following the board’s decision to consolidate high schools the administration began taking the necessary steps to assure this would be accomplished prior to the 2012-13 school year,” he said.

Bracy said the administration has continued to accomplish tasks required in order assuring that a decision by the board to go forth with the consolidation can be accomplished.

“In the event that the board votes tonight to move forward with the consolidation of schools I would like the board to consider the following items this evening: the name of the school, the school colors and mascot, the purchase of band uniforms and a painting contract for Northampton County High School-East,” he said.

Little moved to approve adding Bracy’s items to the agenda. Marjorie Edwards seconded the motion and the measure passed without objection.

The public comment portion of the meeting once again saw several speakers asking board members to reconsider their decision. Many speakers again spoke of the long bus rides from the western end of the county to the high school in Creeksville and how it would affect student academics.  A few speakers also questioned the cost of renovating East, quoting a $5-7 million figure.

The board later addressed that figure as Ingram brought it up in her opposition to the vote on the painting contract for East.

“Where is that number coming from,” questioned Marjorie Edwards.

Ingram said the figure came from a packet prepared by Assistant Superintendent Phil Matthews for a citizen who requested it, which was distributed by that citizen during public comment.

Board member Kelvin Edwards later asked Matthews to explain the figure saying he was unaware of it.

“In 2007, a company called Progressive Design Collaborative did an in-depth review of Northampton East, its mechanical systems (heating/air, electrical, wastewater),” Matthews responded. “Their cost was $3.7 million. Since 2007, because that school has been operating, not $3 million has been spent, but a lot of the things that was addressed in that report have been already repaired.”

Board member Rhonda Taylor noted those items were done because there were already students in that school.

“That’s not an additional cost,” said Matthews. “The $1.2 million (in the report) was staff/utility cost.”

It was further explained later the $1.2 million was operational costs that were going to exist no matter what.

While the board attempted to conduct its business following the merger decision, the audience shouted remarks as well as giggled and whispered amongst themselves leading to Johnson having to call for order again.

Following the board concluding its business, Johnson attempted to make comments on the merger as audience members continued to make remarks to him.

Johnson said he had worked on both ends of the county and, while he was an educator, he strived to know his students’ parents.

“We (the board) have been here and we have listened,” he said. “I have heard transportation, but I haven’t heard anything about education. Our children are, as we have said, our most important component of this county. …I just ask for your patience in trying to work with us through this.”

Johnson said the board has been to the county commissioners, but have been turned down concerning the bond referendum for a new high school.

“We can only do so much as a board because they (commissioners) handle the money,” he said. “We are trying to do everything we can in our power to get the commissioners to agree with what some of you have said tonight and that is: give us the money. If you go back and think of all the schools that has ever been built, the county has never furnished the money. They have had bond issues that the school board has had to pay back. The county by law is required to furnish the school system with the money. They haven’t done that. And we can’t put a gun to their head and force them to do it. We ask and if they refuse we have no other alternative. If we need money we go to mediation and that cost money too.”

Johnson said he doesn’t arbitrarily make decisions, but he prays about them too.