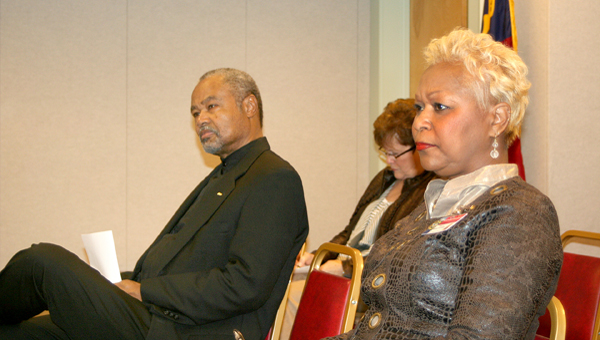 On Tuesday, the Northampton County Board of Commissioners approved a resolution authorizing County Finance Officer Dot Vick to file an application with the Local Government Commission (LCG) to incur debt for the project. The board additionally approved a construction financing agreement with RBC Bank.

The board’s decision came after a public hearing was held for comments on filing the application with the LGC for the $7.46 million project, funded by a $6.96 million loan and a $500,000 grant from United States Department of Agriculture-Rural Development. The county would be eligible to be reimbursed for 65 percent of its annual debt payment from the federal government on the project for services provided by Northampton DSS.

During the public hearing, Eugene Taylor, chair of the DSS Board of Directors, along with new DSS Director Shelia Manley-Evans encouraged the commissioners to move the project along.

“As we know there are about 75 individuals we employ at the DSS building and they deserve a safe working environment,” Taylor said.

He said he questioned the kind of working environment at the current facility where employees are working in cramped spaces.

“It is badly, badly needed,” Taylor said. “That department is touching some 44 percent of our citizens in Northampton County in one way or another. …I would certainly think it touches someone in your neighborhood, possibly someone in your family, certainly someone that you know that are served (by DSS).”

As for the 65 percent reimbursement on the project, Taylor said it was “a once in a lifetime opportunity for Northampton County.”

Evans urged the commissioners to move forward with the project as DSS and its programs assist nearly half of the county’s citizens.

“Please proceed with the building not only for the staff, for the employees, but also the citizens that we serve,” she said.

Nancy Nicholson of Henrico said she was concerned with the project.

“I’m just here in knowing that close to $7 million is going to be spent in our county. I hope it’s going to be spent frugally and in a good way,” she said. “I hope that when they (DSS staff) get their new building that their goal should be to reduce the number of people that we serve in half. I hope that would be one of the things they would look at.”

County Manager Wayne Jenkins also read a letter from Roger West of Henrico. West said he was not in favor of proceeding with any capital improvements that would require a tax increase on the citizens of the county.

“If this (DSS project) or any other project can be done without an additional tax burden then I would agree to proceed,” West wrote.

Jenkins said the project has been on the DSS capital improvement plan for the past seven to eight years and has been pushed back due to the lack of funding. When the American Recovery and Reinvestment Act funding was made available through USDA-Rural Development, the county made an application.

“Over the past two or three years as we have worked this project, we have based our annual repayment back to USDA on 65 percent reimbursement from the federal government for services provided by DSS staff,” Jenkins said.

Jenkins presented the board with a breakdown, calculated by the county’s auditor, of the county’s annual debt payment over the 30 year payback on the $6.96 million loan.

Jenkins also presented the board with a construction finance agreement with RBC Bank.

“USDA is requiring all of its applicants now to provide construction financing,” he said.

Jenkins said the county solicited four banks and received one response from RBC Bank, which offered the rate of 1.54 percent on the entire $7.46 million project.

He noted that according to the architect and the contractor the construction should take 12-16 months to complete.

Jenkins also presented an agreement from Maximus Consulting Services. The company would complete a facility cost analysis to determine the optimum reimbursement for the project.

Jenkins said in the past the federal government’s reimbursement has ranged from 60-65 percent.

“Ms. Vick and I believe that the timing of the project and the concern of our citizens that you need to know exactly what that reimbursement percentage will be,” he said.

However, the analysis agreement comes with a $9,900 cost, which didn’t sit well with the commissioners.

“Do we need to spend that kind of money,” Commissioner Robert Carter asked.

“I think you need to know for sure before going into this project what your annual reimbursement will be,” Jenkins said. “As I said, the less it is, the more you’re going to have to pull in out of your tax revenue.”

Hester said he thought it would be money well spent in order to get that reimbursement percentage.

After further discussion, the commissioners decided to table the agreement with Maximus until their regularly scheduled meeting on Monday.

Before the vote was taken for the resolution, Commissioner Fannie Greene stated she has received a lot of emails and concerns from citizens in District 5.

“I want the citizens, particularly in District 5, to know that I have considered all those concerns and I’m certainly listening to what you’re saying,” she said. “But some of the things I am hearing is that we need to move forward in helping our people to get skills and training that they need to be self-sufficient, and I totally agree with that. I think we’re making some strides in doing that.”

Greene said she believed the county was not there yet and there were still a lot people that need Social Services.

“We’re sorry about that, but that is a fact,” she said. “At this time I don’t think that is something we can give up on.”