The bride is the daughter of  Curtis A. Freeman, Sr. and Sharon B. Freeman. She is the granddaughter of Mammie Brooks and Mary Rankins and the late Otis Brooks, Sarah Freeman and Douglas Reynolds.

Serving as bridesmaids were Ana Monge (Matron of Honor) of Winston-Salem, Tameka Boone of Fairfax, VA,

Jaida Stephenson (daughter of the groom) served as a junior bridesmaid.

Demetric Wiggins Jr. (nephew of the groom) was the ring bearer.

Wedding decorations were courtesy of Charlene Dickens and Laura Trivino.

The bride chose an ivory royal silk satin Simone Carvalli gown with a mermaid silhouette and a strapless sweetheart neckline. The bodice was embellished with Swarovski crystals with a chapel length train. 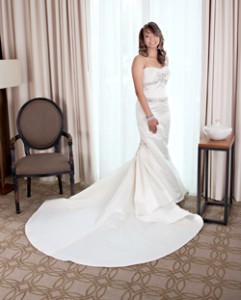