It happened before he could even get out the door.

Colerain Fire Chief Milton Felton knew something bad was going to happen April 16,2011  but he had no idea how bad.

“I was watching The Weather Channel when I saw the storm was going through Askewville,” Felton said. “I knew it was coming this way.” 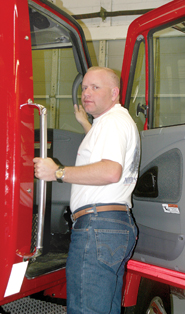 Assistant Colerain Fire Chief Kenny Perry, as well as al other members of this rural fire department, stand ready to answer calls for help within their district. Such was the case on April 16, 2011 where the Colerain firemen provided the initial wave of help in the wake of two deadly tornadoes that struck their area of Bertie County. Staff Photo by Thadd White

Felton said he put his shoes on and headed out the door, but before he could get to his car the damage was already done in Colerain. Felton said he and Kenny Perry, who serves as Assistant Chief and a Corporal in the Bertie County Sheriff’s Office, were both on the way out the door as soon as the tornadoes struck that eventful.

Felton, Perry and the other members of the department didn’t know it at the time, but they were embarking on a journey that would last weeks and months, not merely hours.

Before Felton could have the members of his department paged out, he said they were already heading into the areas devastated by the storm and doing everything they could to help the living and account for the deceased.

Felton headed towards Glovers Crossroads where he came up on a scene that he said he would never forget, no matter how many disasters he has worked in 38 years as a member of the Colerain Fire Department.

“The first house I got to, I found four injured and one killed,” Felton said.  “We had to dig the people out from under the house.”

“The two people in the house were under the dining room table and I’m convinced it saved their lives,” he said. “The foundation of the house was on top of that table.”

Felton said he was calling for Colerain EMS, but the unit had been dispatched already and was working on another call.

“It was about two hours before EMS could get to us,” he said. “It wasn’t their fault because they were working and then they had to cut their way (through debris) in to us.”

Perry also started at Glover’s Crossroads, along with Bertie County Sheriff John Holley, but left to attend to other areas of need when he saw Felton was already on the scene.

“I was off duty, but got in my patrol car when I realized it had hit and started heading out to see what I could do,” Perry said. “The sheriff and I got there, but when I saw Milton was already working in that area, I went to another area and began working.”

Felton said in the middle of working to get to the victims at the home he was at, a blinding rain fell as the second tornado went through the area. He said that made working even more difficult, but the fire department continued to do what they could to help others.

The situation the chief found himself in was true for Perry and all other members of the department.

“Each of the members of the department was in the same situation I was in,” Felton said. “They saw on the news exactly what I saw and went to work immediately. They were trying to get to me, but they each came up on scenes that were just like the one I was working and they had to take care of the people there.

“It was a mess, that’s true, but everyone worked together so well that we got everything together pretty well,” he added.

Felton said he was fortunate enough to have two EMTs on the fire department and two registered nurses who were with them working that night.

“They fell in and working and, I believe, saved people’s lives that night,” he said.

In addition to the emergency personnel, the fire department was equipped with basic first aid and oxygen to help those who were suffering.

While the Colerain Fire Department was leading the way aiding their community, Felton said he appreciated the work performed by each of the fire departments in the county.

“In the beginning, Trap and Perrytown were out with us, but basically all the departments came out to help,” he said. “We couldn’t have done it without everyone working together.”

“The other departments helped so much by just helping clear the road ways,” Perry said. “They were cutting their way into us and that helped tremendously.”

Felton said while they were all working, the adrenaline was pumping, but no one got out of control.

“Everyone seemed to be calm and to be doing what had to be done,” he said. “No one got too caught up in the emotions of it.”

While that was true, the chief admitted he had never seen anything to prepare him for what he saw that night.

“I had no idea it would happen here,” he said. “We’ve been through hurricanes and been to wrecks and even seen people burned when we go to fires. We had never seen anything like this. Nothing could prepare you for what we saw that night.”

After working through the night to get people accounted for, the Colerain Fire Department was busy the next morning making sure everyone was in place. Felton and Perry said the department went around checking on each person and left paint where they had been to make sure everyone knew which areas had been covered.

“It’s bad to say, but as far as getting us prepared, Hurricane Isabel (2003) was a drill,” Felton said. “We had things in place because of that which enabled us to know how to handle the situation.”

While the firemen themselves were busy working, the buildings that house the department were also being utilized. The Colerain Fire Department Training Center was the base for feeding those who had suffered damage in the storm and those who were working to make the situation better.

In fact, the building was used from April all the way through December as the community continued to feed volunteers from the North Carolina Baptist Men.

In fact, some of the donations were saved and put away until those who suffered damage found permanent housing and are still being distributed now.

“We went for a week solid and some people for more like two weeks,” Felton said. “We were fortunate to have help, though. The North Carolina Baptist Men and Samaritan’s Purse were a Godsend.”

Felton said he was thankful for those organizations and for the members of the other fire departments that worked so hard.

“Everyone was top-notch,” he said. “Everybody jumped in and worked together so well that I couldn’t be prouder.”

He said he was also proud of the men and women of the Colerain Fire Department.

“They are top of the line for what was done that night,” he said. “They are just great people.”

Harold Miller lives as he has taught. A tour of his farm on a battery operated golf cart will tell... read more