Harold Miller lives as he has taught.

A tour of his farm on a battery operated golf cart will tell you that.

From his geothermal heated/cooled home, to his manure fertilized garden, to his most recent project, a battery operated ’49 MG TD, Miller believes in sustaining all things “green”. 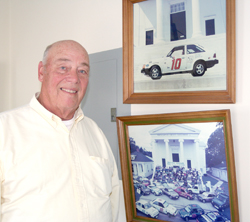 Harold Miller still has fond memories of the Electric Vehicle program he helped to build in Northampton County, as evident by these two photos he keeps in his Jackson home. Staff Photo by Amanda VanDerBroek

“If I can get this going this is what you’re going to see us driving around,” he said.

Despite his out-of-doors surroundings at his farm, Miller is half mechanic and half teacher by trade. It was those two trades along with Miller’s passion for the environment that came together and lead to the creation of the electric vehicle program and the NEAT Team at Northampton County High School-East, one that is still successful today.

If you have enough time, Miller will happily explain to you the benefits of electric vehicles and how they outweigh their gas counterparts with those advantages.

“Back in ’93, ’94 no one ever thought electric cars would get off the ground because it was so low power then,” he said.

During the earliest part of his career while working with the likes of GM and  Ford Motor Company, Miller saw the effects of gas pollutants by way of his fellow employees coming down with carbon monoxide poisoning. He later learned other ways gasoline was poisoning the environment around him through the water, land and air.

“Any civilization, if you look around, that has automobiles then you’re going to find the water around them are going to have gasoline in them,” he said. “And there has to be a correlation, there’s got to be a reason. The cars are there and the water is polluted, you’ve got to look at the car.”

Where it all began

Born in Mount Airy and raised in Virginia, Miller came to Northampton County Schools  in 1969, where he became the automotive shop instructor.

Miller began his work as a mechanic and in other roles for larger automakers and first began teaching at Chesapeake Community College.

“I kind of liked it,” he said about that first teaching experience.

After the teaching bug bit, Miller set out looking for a job in the profession and landed in Northampton County.

“I started the automotive program at Northampton (County High School-East),” he said. “I guess what makes it interesting is that when I first came here I said, we need to take the engine and throw it away and use a starter, because it’s the most efficient of the two types.”

In one of his very first classes at NCHS-East, Miller had a student named Tom Pope, who now teaches the automotive and electric vehicle classes at the same school.

Even though the classes were held in the agriculture building the first couple of years, the automotive class was still cutting edge.

“We were one of the first programs to have computers, because there were already computers in automobiles.” he said.

In 1976, Miller really saw a more relatable need for electric cars with the oil embargo that had an effect on gas supply and prices.

“Everybody had to get in line (for gas), if you had an odd license plate you went on one day, even was the next,” he said.

It would take 17 more years before electric would eventually win big in Northampton County.

In 1993, John Parker, then assistant superintendent, came to Miller about that electric vehicle he had always heard Miller talk about.

Virginia Power, one of two local utility companies, was gearing up for a electric vehicle competition to be held on a NASCAR track in Richmond, Va. Parker told Miller the school could do it but would have to combine resources with schools in neighboring Halifax County.

“I said, ‘We’ll run with the big boys’,” Miller recalled.

Miller credits Parker for being the visionary and said his own role in it all was to work with the students, build the car and give advice on what to do.

And so, NCHS-East, NCHS-West, Weldon High School and Northwest High School started meeting at East after school to begin work. Miller along with a Teach For America physics teacher, Eric Ryan, set out to make Parker’s vision reality.

“He (Parker) said if we put them together–the academics and vocation subjects–this is what education is all about,” he said.

The crew started working on the car (aptly named “The Shocker”) for the EV Grand Prix competition slated for spring of 1994. Local race car driver Keith Edwards helped to teach the team how to be competitive with the car.

“I think the citizens, myself, the administration all knew that this was an opportunity where we would be on the same playing level as anybody else,” he said. “And no longer could you say, ‘Well, their test scores aren’t high enough to compete’.”

The team (North East Automotive Team or NEAT) had little resources, only $6,000 worth of donations to put into their automobile.

But Miller said there was something else there pushing the team on, an unfaltering dedication.

“You’d be surprised at the talents our students have when you just let them use it, and start letting them use their creativity,” he said.

With that dedication, the students were also  a hodgepodge of kids from different backgrounds, racial, cultural and academic.

“They weren’t handpicked to be the cream of the crop and that was our success,” he said.

Acceleration, handling and breaking, design, question and answer, video were just a few of the basics the students had to master. It’s an array of skills, Miller said, the students have to demonstrate and master in order to be successful.

Miller said like any of the high schools who went to that 1994 challenge they didn’t know what to expect and they were nervous. But skill, (and perhaps some luck) was on their side as NEAT captured first. There were a lot of “firsts” when it came to NEAT’s success, including the first girl driver on the NASCAR track in Richmond. Miller said that student ran the range event.

“We had girls helping to run that team,” he said. “They were keeping up with what had to be done, whether it was right or wrong.”

Parade Magazine, the Wall Street Journal were just a handful of national and local publications that came calling. A parade was held in the team’s honor in downtown Raleigh.

“I’ve always had the belief that the kids will do what you ask them to do,” he said. “It’s like any other team or any sport if they catch on to what you want them to do and you give them the chance to come up with their own ideas then they will succeed.”

The team was successful in an array of other electric competitions and it’s a legacy that continues to today.

In 1999, Miller “went out in pretty good shape” retiring from Northampton County Schools. Despite his retirement, Miller’s passion and support for electric vehicles and the local NEAT rallies have never wavered.

No matter where and when the rallies may be Miller is not far from NEAT keeping an eye on what he helped created.

“I’ll tell you what, those kids were dedicated and the ones I see out there now have that same dedication,” he said. “They want a cleaner world and we can give it to them.”

Last year, the NEAT team tied with Topsail High School for first place at the team’s annual rally. In most recent years, NEAT’s annual rally has been held at the North Carolina Center for Automotive Research (NCCAR), a premier testing track, in Garysburg. The partnership between the modern facility and NEAT is cutting edge, bringing the roots of electric vehicles together with the most recent technology in the field of automotives.

In the end, it’s those innovative and progressive thoughts and ideas that Miller wants to stay with his former students and those who are in the class now.

“The students feel good about a car that is clean,” he said. “No matter how we try to paint it, gas cars are very, very, very pollutant. You can sweep it under the rug, but it’s kind of like you cleaning the house and putting all the dirt under the bed, it’s going to come out somehow. …People are worried about the high price of gas, but you know, change is coming.”

There are numerous ways for individuals to blow off a little steam after a tough day at the office. Some... read more