There are numerous ways for individuals to blow off a little steam after a tough day at the office.

Some prefer a round of golf; others a competitive game of tennis……then there’s chores around the house, etc.

On a blustery late February afternoon, Henry Daniels – the owner of Pro Sparkle (four laundromats and a pair of car washes) – chose to sit on the bottom of a ball bucket and serve as a catcher while his youngest daughter (Ruthie) worked on her pitching skills for the upcoming high school softball season. 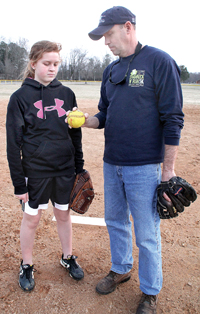 Henry Daniels of Ahoskie works with his daughter, Ruthie, on proper grip of a softball. Daniels is a long-time volunteer youth sports coach in the local area. Staff Photo by Cal Bryant

Such is the life of a father who also serves as a volunteer coach for youth athletics.

While Daniels, like his father (Hal Daniels), is a savvy businessman, what he really enjoys in life, other than satisfying his many loyal customers via clean clothes and shiny vehicles, is coaching youth sports. That passion began innocently enough, working to hone his oldest daughter’s (Roxie) budding athletic skills back when she was just five years old.

“It all started when Roxie was involved in the Roanoke-Chowan Soccer Association,” Daniels recalled. “Then Ruthie came along and I did the same thing with her. Between the two I worked with them in soccer for seven years.”

As proud as he was as a father to watch his two little girls grow athletically, Daniels’ love of youth sports didn’t stop with just his daughters.

For the past three years, Daniels has worked with girls’ fast-pitch softball within the Ahoskie Recreation League and Cashie Youth League in Windsor.

“I guess you can see that I’ve been all over the place when it comes to coaching young people,” Daniels said. “I just simply change from one sport to the next.”

The 2011 softball season was an extremely busy one for Daniels as he coached three different teams….one each in Ahoskie and Windsor and then worked with Bo Williams of Windsor to form a girls’ (age 12-and-under) travel softball team.

“That was tough, trying to balance things between three different teams,” he said. “The travel team started playing in the spring and it lasted through late summer.”

Now, with the arrival of the 2012 softball season, Daniels will first follow the fortunes of his youngest daughter as she embarks on her first year competing at the varsity softball level at Ridgecroft.

“I’ve just gotten into the sport of competitive softball over the past three years,” Daniels stated. “It’s a fun game…it’s a game with a lot of strategy. Plus, with the travel team, you get to meet a lot of people and make new friends.”

Daniels was quick to thank those that helped guide him and offer coaching advice for the sport of softball.

“I learned a lot from Neil Baker over in Windsor, and now from Bo,” he said. “Neil is a class act and does a lot for the Cashie League, of which he served as the league president. He also coached Ruthie in the age 10-and-under travel team. Bo is another great mentor for softball, he eats and sleeps softball….he’s a softball junkie. He knows the game.”

Daniels also wasn’t alone in volunteering his time and efforts to put the Ridgecroft Middle School basketball program through its paces as Frankie Futrell, Kevin Brown and Taylor Harrell joined in as volunteers.

The big question is would Daniels have involved himself in youth athletics if his daughters would have shown no interest in sports.

“I’ve always liked coaching, so I guess the answer to that question is yes,” Daniels responded. “Maybe that all goes back to my high school soccer coach Danny Wilkinson; he inspired me, he was a good influence on my life.”

Daniels has experienced both sides of the gender spectrum during his coaching career. When asked what the major difference was between coaching boys vs. girls, he was quick to respond, “The speed of the game. Boys tend to be more aggressive, which makes the game quicker. You have to push the girls a bit harder to be aggressive.”

His wife of 25 years, Pat, chimed in on the same topic, saying, “There’s a lot less drama (with the boys).”

With his youngest daughter just launching her varsity career, Daniels said he’ll remain a coach, “at the very least until she graduates. Ruthie loves sports, all sports, even though she tends to like softball more now. There’s more opportunities for her to play softball around here.”

Daniels has to love it as well. He volunteers his time in the true spirit of that word as he performs the task through pure love of the game and the young people that surround him, not for monetary gain. As is the case of many youth coaches, a lot of the money spent on travel, food, etc. comes from inside their own pocket.

Another aspect of coaching youth is watching them grow and mature into young adults.

“Being involved in athletics teaches young people how to get along as a team, a value they’ll need when they land a job and have to work with others,” Daniels noted. “It teaches sportsmanship, it teaches you how to respect others.”

From the time he first ventured into the world of being a youth coach, Daniels has helped shape the lives of boys and girls who are now young adults.

“Having them come up to me now and tell me thanks for what I did when they were younger means a whole lot,” he said. “I watch the girls now on the girls jayvee basketball team at Ridgecroft and realize I began working with them three to four years ago and still work with them from time to time on the weekends, it makes me feel good when they run a certain play and run it right.”

If there was one wish Daniels would like fulfilled is to see more adults become involved in coaching young people.

“You just don’t see it a lot today, maybe it’s because of their work schedules, everybody is so busy, but I would still like to see others get involved,” he noted. “Maybe I’m lucky as the business I’m in gives me flexibility. It allows me the time to volunteer. It’s still time consuming, but I’ve been able to work it all in.”

Daniels had nothing but praise for the adult men and women who do volunteer as youth sports coaches.

“I commend them for everything they’ve done over the years,” he said.

Personally, Daniels said he was still riding the learning curve when it came to coaching softball.

“I’m a basketball guy….I love that game, but I’m beginning to really like fast-pitch softball,” he said. “By being in it only for the past three years I feel there’s so much more to learn about the game, the x’s and o’s of the game. The best way to learn more is to go to those who have been around this sport for a long time and ask a lot of questions.”

As a coach and a father, he also understands there are others who are a lot more capable of helping Ruthie develop her game.

“Ruthie took lessons from a pitching coach, Karen Burnette; just talking to coach Burnette about pitching and game situations has taught me a lot,” Daniels said. “Ruthie has also taken one-on-one basketball lessons from Chowan assistant coach Kenyon Weeks. He’s a smart guy. I’ve learned a lot just by watching him put Ruthie through drills. If there’s someone at the next level that knows more than you, then use them, ask them questions….there’s always room to grow as a coach.”

If there was one major lesson learned along the way, Daniels said there was more to athletics than winning or losing.

“It’s about going out on the field or court and giving it everything you’ve got; it’s about being there for your teammates,” he stressed.

“I’ve been blessed with having several successful teams, one that went the entire season without a loss, and I’ve coached teams that really struggled,” he added. “The first part of that equation is nice, but the latter is what really challenges me, really drives me to want to do a better job. I want to continue coaching; I really enjoy working with young people, it’s fun, it’s a release for me after a stressful day at work.”

Athlete – it takes one to know one

As is typically the case, men and women that currently volunteer their time in coaching young people were athletes themselves earlier in life.

Such is the case for Daniels, although he said he was a late bloomer athletically in high school (a 1979 graduate of Ridgecroft School).

“I didn’t come out for our soccer team until my junior year,” he recalled. “I was able to work my way into the starting line-up that season and was a full-time starter in my senior year.”

That final season proved fruitful for the Rams; Daniels said they lost only three matches and made it to the state quarterfinals.

Daniels doesn’t limit his community spirit to just serving as a volunteer coach. He is a member of the Hertford County Committee of 100 for Economic Development; serves on various committees at First Baptist Church of Ahoskie and is a former member of the Ahoskie Rural Fire Department.

The son of Hal and Ann Daniels of Ahoskie, Henry is a 1982 graduate of Chowan College with an Associate’s Degree in Graphic Arts. He didn’t venture from home to launch his career as he initially worked at Pierce Printing for six to seven years where he said he “ran a press and did whatever was needed back then.”

In 1988, Daniels ventured out on his own, purchasing H.B. Powells’s Laundromat behind his old service station on Academy Street and then George Newbern’s Laundromat across the street from Ahoskie Food Center. His properties all fly under the banner – “Pro Sparkle.”