Scared to death….basically that sums up the feeling Patricia Shearn experienced when she ventured into a new line of work back on April 12, 1991.

Now, nearly 21 years later, Shearn has earned the respect of everyday citizens of Hertford County as well as those within the local judicial community.

Shearn was the first black female appointed as a Hertford County Magistrate. She is currently the county’s Senior Magistrate….but not for long as retirement comes at the end of February. 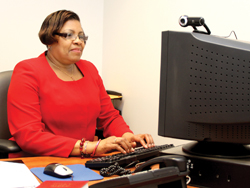 “I had no clue what a Magistrate did,” Shearn said, recalling the time she was advised of the vacant position by local Superior Court Judge Cy Grant. “I had never dealt with that side of the law. I put my application in and just waited.”

At that particular stage of her life, Shearn was unemployed after cutbacks at Legal Aid of Ahoskie had left her without a job.

“I wanted a job badly; I had filled out so many applications that I could do them blindfolded,” she stressed. “I prayed that a job would come my way and, low and behold, two days later Judge Grant called and asked me would I like to take the Magistrate’s job. I started sweating ‘cause I knew my prayers were answered. I took the job and the rest is history.”

As it turned out, Shearn proved a quick leaner.

“It was a lot of on the job training,” she said. “Mr. (James) Hill, a Magistrate in Murfreesboro at that time, was my mentor. He taught me a lot. He told me to call him if I needed advice and I called him often back then.”

Shearn’s formal training for the job came through the North Carolina Institute of Government.

“That was the book work, they do not prepare you for what may walk through your door; every day was different,” she said. “As is so often the case the best training a person receives is from the seat of their pants.”

Shearn said she was given one key piece of advice early on in her career, words she lived by over her 20-plus years as a Magistrate.

“Always be fair; always hear both sides of the story before reaching a decision and treat everybody the same,” she stated. “I’ve always kept that in my mind over the years, no matter what the situation was, no matter how it looked at first glance. Even if there was something the person sitting in front had you had done that really got to you, really bothered you, I always treated them fairly.”

By the nature of their positions, Magistrates are typically the first line of judicial authority an individual will see upon their arrest.

“I sometimes catch people at their worst time,” Shearn said. “I’ve learned how to handle that….if a person is upset and they’re mouthing off, I sit just as calmly and quietly as I can. Words delivered the wrong way or in the wrong tone can trigger a person. When I do speak, I keep my voice at an even tone and they’ll bring it down a notch. More often than not they’ll leave as if you are their friend. It’s all about how you treat a person.”

Even though she didn’t treat it as a drawback to the job, Shearn did note that being a Magistrate often means she and others in her profession are peppered with questions while off duty.

“We live in a small area; I know most everybody and they know what I do for a living so I’m always asked questions about certain aspects of the law while I’m out shopping,” she said.

Being a Magistrate also means that each and every day brings something different.

“There’s never a dull moment in this line of work,” Shearn stressed. “I probably couldn’t work a calm job. You never get the same thing each day, it’s always changing.”

However, within every cloud is a silver lining. While Shearn has to deal with those at their worst following an arrest, she does quite often experience the other end of the spectrum….seeing them on their wedding day.

“I have no clue on the number of people I’ve had the pleasure of uniting in holy matrimony,” she said. “There’s at least 500 or more over my 20 years.”

She has conducted wedding services in her office, at the couple’s home and even down by the river.

While she is indeed a person of authority in her own right, Shearn has those she holds in high regard.

“When I first started I looked up to Mr. Hill because of things he taught me, he gave me a lot of insight into this line of work, things they don’t teach you at the Institute of Government,” she said. “But throughout my career as a Magistrate, the people I look up to the most are the judges here in District 6B. They are my supervisors; I hold them in high regard.

“The Sheriff, the (town police) chiefs, I look up to them as well,” she added. “We’re all like cogs in a wheel, we all have to do our job to make the wheel turn. We all share in this, it’s not just a one man’s or one woman’s job.”

Now that the sun is setting on her career, Shearn offered a bit of advice for anyone looking to get into the same line of work she has enjoyed over 20-plus years.

“I would tell them that this is a good job to have,” she noted. “Sometimes you see people at their worst, sometimes at their best, but in whatever mood the person sitting across the desk from you is in, always treat them fairly. Don’t discriminate. Treat them with justice by knowing you’re going to do for them the best you can. Never, ever kick a person while they’re down.”

Now that retirement is near (her last official day on the job is Feb. 29), Shearn said she already has plans to keep her busy.

“My husband my a trike and we plan to travel, ride off into the sunset, we’re going to do some traveling” she said with a big smile across her face. “I’ve got 10 grandbabies; they’ll be enough to keep me busy.

“I also love to fish, freshwater and saltwater, I don’t care what I’m fishing for as long as they’re biting, so I’m planning on doing a lot of fishing in retirement,” she added.

The daughter of the late McKinley and Beatrice Lassiter who made their home in the Vaughantown community near Murfreesboro, Shearn is a 1972 graduate of Murfreesboro High School. She went on to receive her Criminal Justice degree from Shaw University.

She is married to the Rev. Dr. James Shearn and the mother of three children – James Jr. (now deceased), Beatrice Foster, a lawyer working at Langley Air Force Base in Hampton, VA, and Tiffany Johnson, a Physician’s Assistant in Richmond, VA – and the grandmother to 10.

Shearn also attended Roanoke-Chowan Community College where she received her cosmetology license in 1973 and earned a General Office degree in 1989.

Prior to becoming a Magistrate, she worked as a legal secretary for Murfreesboro attorney Vernice Howard and at Legal Aid of Ahoskie.

WINTON – There will be no loss of employment status among current dispatchers upon the planned merger of the three... read more